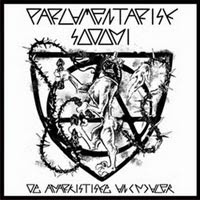 But it’s side B where things get genuinely interesting. Beginning with a near-Locust calliope-core riff, the nearly 11 minute “Klaebukranikene (de Anarkistiske An(n)aler)” just might be one of the most ambitious, excoriating pieces of up tempo music I’ve heard since Disfear decided to pen a 9 minute d-beat tune. Clearly An(n)aler’s centerpiece and highlight, the song careens through hopscotching grindcore and classic European thrash motifs pierced by a snarling, slightly trebled doublepicked bandsaw riff over top and stitched with cymbal clutching goodness. There have been 10 minute grind albums that couldn’t hold my attention beyond a listen or two, but “Klaebukranikene’s” Louis Black smoking an eight ball intensity grabs me by the face, comes up with some Clockwork Orange equivalent gizmo for me ears and forces to me to fucking pay attention.

If there is any album that could potentially wrest Wormrot’s hard won grindcore crown from them this year, it would likely be De Anarkistiske An(n)aler. And I don’t say that just because Papirmollen mentioned *cough* a certain blog *ahem* in his thank you list. (Dude, that just made my decade).

Posted by Andrew Childers at 6:45 PM

I love this album. It's painfully clear that this dude is really pissed. The music and layout manage to touch on everything I love about grind and punk, and he has a good sense of humor it seems.

....so do you like this better than the first? I got bored. Songs are too long I guess. ADD much?

Fuck. I've had this so long I thought it was from '08. Definitely top 5 material.

This guy is prolific...

One final EP came out on 625 and that's it for the Sodomi project unfortunately.

I thought there was a split 7" coming out too?

i really liked the longer songs. i thought mollen really expanded his writing. dude's a beast who easily could have banged out yet another "har" (which, yeah, is a bit more visceral) but i give him big, big points for taking a risk. i feel the same about the new graf orlock (coming soon), which really pushed the band's songwriting. i think grind in particular can be susceptible to repeating itself ad infinitum so when somebody pushes the boundaries and succeeds, big praise is deserved.

Better to quit while he's ahead, I guess. But this better not be the last we hear of him.

i emailed him to find out about pxsx but he has told me before he's working on a new band. he just hasn't spilled any details yet. so he's definitely not going away.