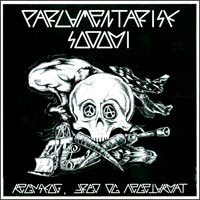 Lifting “Regnskog, Fred Og Vegetarmat” from De Anarkistiske An(n)aler and adding five new songs, the EP doesn’t feel as consistently strong or unhinged and dangerous as Sodomi’s prior full length, but even these cutting room floor clippings tower over a lot of what passes for political grindcore. The guitars drill down through our privileged, comfortable lifestyle like a diamond-tipped class warfare probe while Papirmollen barks out a litany of war crimes amid anarchist street battle drumming.

“Terrormat FRP” divebombs Norgwegian neo-Nazi politicians and their brownshirted followers with a whammy bar-heavy solo that manages to split the difference between Eddie Van Halen and Kerry King. “Knus Junaiten (USA Do)” gives me one more good reason to be guilty for being an American in a concise 1:26.

Posted by Andrew Childers at 6:38 PM

just heard from the man himself, ps is on hold and he'll be announcing the new band soon. that's all i've gotten from him so far.

New project kills. Not sure why he's keeping it a secret.

smart ass.
but so true.

I think it is one of the best kind of music, I used to buy some albums and go to some concerts, but I change my likes,so I know that in USA it is so popular.