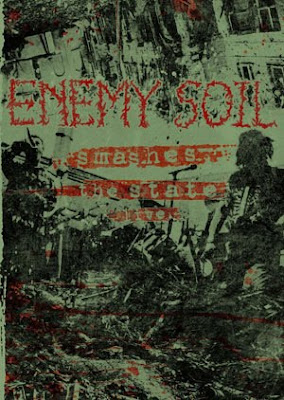 As a live DVD, Enemy Soil’s Smashes the State Live compilation is a fairly average collection of homebrew footage of the seminal Virginia grind-go-round. Despite largely being shot by hand-held video cameras in the finer rec center gyms and school hallways of Maryland, D.C. and Virginia as well as in a choice Canadian basement, the video quality (edited down in spots) is consistently clear and the sound is surprisingly robust for the amateur (not an insult) quality videography. In an era of multi-camera, perfectly edited concert footage DVDs that look more like MTV promos than a genuine recreation of a metal experience, that atavism refreshing.

While the DVD as a video experience is a solid if average product, the moment of revelation came when I realized there is nary a drum machine on Smashes the State Live. As someone who has only experience the band on CD and has always compartmentalized them as the historical antecedents of the drum machine grind movement, it’s an epiphany. Instead, a pre-Pig Destroyer Brian Harvey mans the throne for the bulk of the performances. It forced me to zero in on the human element of Enemy Soil: a young J.R. Hayes demonstrating his maniacal magnetism well before he earned his high school diploma, Omid Yamini (of later Battletorn fame – a connection I had not previously made; one of the City of Caterpillar guys also played a prominent role) and his ominous, burbling bass assault and of course the chronological creep of stickers on band mainstay Richard Johnson’s Warlock. Think of it as the ghost behind the machine. Though my pulse does the cha-cha at the thought of 1,000-bpm mechanical percussion, it was that human element that truly powered Enemy Soil despite its chimerical line up over the years. Seeing them live sans mechanical accompaniment only reinforces that realization.

How much you’ll get out of Smashes the State Live will be directly proportional to your attachment to the band and its legacy. Like Johnson said at their 2001 reunion show in New York, “For better or for worse, we’re Enemy Soil.”

That you were; turns out I hardly knew ye.