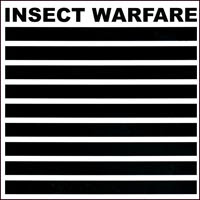 Insect Warfare
Insect Warfare
625 Thrash
Insect Warfare’s single-side, Pepto Bismol pink 10 minute mindfuck vinyl kissoff didn’t click until I saw them namecheck Gore Beyond Necropsy on the back. And then everything made perfect sense.
Anyone expecting World Extermination 2: Electric Boogaloo will be sorely disappointed by the subsequent confounding, Merzbow-esque noise assault. Like Merzbow and GBN (who have collaborated in the past), Insect Warfare (who are briefly active again) gave grind the finger and deliberately confounded their fans with a 10 minute assault of lo-fi noise and FX box abuse that sounds more like elctrogrinders Jesus of Nazareth than Endless Execution Through Violent Resolution.
The songs, if they can be divided in any kind of way, uniformly start with a four beat count off and then devolve into piercing electronic detritus – Beau Beasley is not credited with playing any guitars on this at all but rather other electronic goodies – that threatened to be swallowed by staticky white noise. This is grindcore as performed by poorly maintained industrial machinery in an era before work place safety laws. You just know somebody lost an arm in the process.
Whether or not this is an enjoyable listening experience is almost a secondary quandary as Insect Warfare defiantly pushes grindcore’s outer limits. After being the standard bearer from trad grind’s resurgence the last few years, it’s a startling transition that only reinforces the notion my sneaking suspicion that there may have been more to the Texas trio than they have hinted at on past releases. While younger bands have advanced and perfected similar sounds, Insect Warfare just may have won that war with grindcore, cementing their hall of fame status in the process.
Posted by Andrew Childers at 7:04 PM

ha was wondering when you gonna do a write up on this one.

i picked this one up about a few months ago. while i can't say i liked on the first listen the more i play it the more it grows on me. i mean come on a grind album with no guitar takes a bit of getting used to. ask me about this one in a year and maybe i'll have figured out exactly how i feel about it.

Awesome noisecore's all I'm saying. At times it reminds me of DxAx's 7.62mm tape.

all of these are albums i've wanted for months now, but i had to get my turntable fixed first. damn vinyl-only releases.