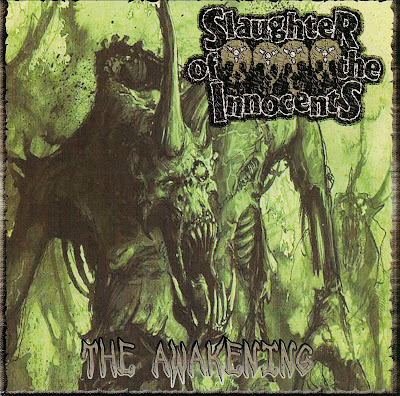 Slaughter of the Innocents/Endless Demise
The Awakening/Split
RSR
2007
I loved Excruciating Terror. They were a staple of my formative grind listening, and because of that I’m tireless in my advocacy for Jerry Flores’ latest project, Bloody Phoenix, as 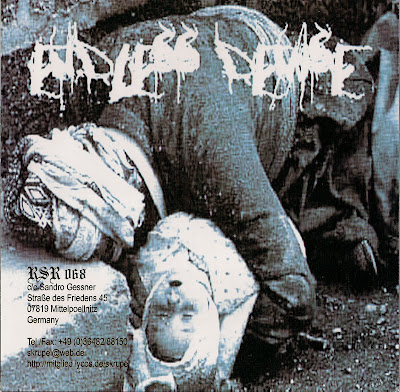 well. In fact if I could date myself with a hilariously out of touch cultural reference, I’d like to paraphrase the Brendan Fraser/Steve Buscemi/Adam Sandler meathead metal montage Airheads: Jerry Flores could record half an hour of himself farting on a snare drum, and I’d probably buy it just to complete my collection.
But even with that level of slavish devotion, I had a little trouble orienting my head around Endless Demise, the most recent band by Victor Garcia, ExTx’s gravel gargling motor mouth. The Terror just sounded so fricken massive. Even today they’re one of the largest sounding grind bands to ever stomp the terra. So it’s probably more than 15 years of nostalgia that clouded my initial reaction to Endless Demise, who make a glorious racket in their own right. Drummer Sam Ramirez beats his snare, in particular, like it owes him money over the space of three songs and Garcia’s shrill banshee shriek can only be the product of some sort of self-inflicted testicular trauma. String section Vito Tagliente and Fred Gutierrez acquit themselves admirably, but their monochrome wall tends to be obscured by memories of bigger, burlier sounds.
But being the Mirror, Mirror (you can tell cuz I’m the one with the goatee) Mark Antony of grindcore (how is that for pairing two totally unrelated cultural touchstones?), I come to praise this split not to bury it because whatever unfair hang-ups I may have had about Endless Demise, they get sandblasted into oblivion by German marauders Slaughter of the Innocents who nicked more than their name from Repulsion. With double the number of songs as their split-mates and a truly putrid pre-suck Slayer guitar tone, the pseudonymous quartet (Shadow Blade – since departed, Big Ape, Inquisitor 666 and The Bertilizer, complete with portraits that would do Bolt Thrower proud) barely pause to separate the guilty from the innocent before slaughtering everyone present, assuming everyone’s respective deities will recognize their own. Inquisitor 666’s snare hand must be pneumatic to be that tight, that fast and still hit that fucking hard. Low fi, irreverent and scabbed over Slaughter of the Innocents pretty much defines grindcore greatness. This band needs to get out of the split EP backwater and get working on full length now. There are plenty more innocents out there.
Posted by Andrew Childers at 6:46 PM

It's Bloody Phoenix, by the way, not 'Blood Phoenix'. Too tireless an advocate to get the name correct?

And Jerry plays the guitar, not the drums.

1) you are correct, i missed a y when i edited. thanks for catching that.

2) turn your humor meter on and go watch airheads then get back to me.

Hey, you've got a troll now!

I will be checking out Bloody Pheonix soon, given your enthusiasm.

i wouldn't say troll. suitably sarcastic, but i'm a big boy and you're not gonna hurt my feelings when you rightly point out a typo on my part. and if you're not one of the olds like me and haven't seen airheads, i can totally see misunderstanding the farting on a snare drum thing.

and if you love excruciating terror or wish terrorizer were meatier, then bp should hit the spot.

Got a BP album on the way from Interpunk.

Keep up the good work. It seems like every 4 or 5 posts, at least, I find some new band I need to hear.

Slaughter of the Innocents sounds promising, too! Man, listening to good music is hard work.