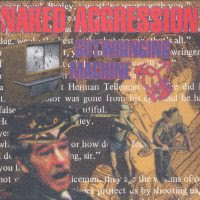 Naked Aggression
Gut Wringing Machine
Cargo
1998
Years before Green Day permanently debased the notion of punk rock for another generation by farting out bloated, self-involved concept albums about thoroughly safe topics such as hating George W. Bush, a tiny Southern California quartet penned a ghetto opera to age, doubt, insecurity and blame that was astonishing for its grace and sweeping in its vision of teen angst amid American suburbia.
Naked Aggression spent most of its early years as Generic Chick Fronted Punk Band Number 2,345,837,629, raving about how The Man and how he wouldn’t Hold Them Down (and yes, caps are absolutely essential for that breed of teen bravado). But then came Gut Wringing Machine and guitarist Phil Suchomel’s decision to fully integrate his classical training into his punk. That insight permeated through all elements of the band. Instead of generic declamations about the suckitude of suburban life, school, home and church, Naked Aggression turned inward, penning introspective songs about runaways, suicides, abuse victims and the kind of emotional turmoil that comes as you slowly age out of your adolescent rebellion and into something resembling adulthood. It was that maturity, reluctant it may be, that powered Gut Wringing Machine. Several songs fixate on the notion of living life without regrets before your inevitable death, particularly in “Chasing Dreams” and the title track. French horn, tubular bells and piano add startling sophisticated grace notes to the song “Gut Wringing Machine,” a forlorn ditty built on the tension between growing older and constant teen protestations that you’ll live your life the way you want without ever compromising or settling down.

“Wound Up” is a blazing spitball of incommunicable adolescent rage that can’t identify much less articulate its source of frustration, just knowing it has to lash out at something while “Stay Away” offers a sympathetic portrait of the runaway impulse that neither offers excuses nor minimizes the slights and abuse that land kids on the streets. Against a backdrop of ringing tones and charging verses, “The Prose and Cons of Dying” begins to ask some serious questions about what exactly it means to rebel, something that never would have occurred to the band’s earlier incarnations.
Suchomel , who penned the lyrics and wrote the music, would die within a year of the album’s release and the band, which had boasted a new rhythm section with every new release, decided to add a new guitarist and soldier on, but they had already reached a startling pinnacle they would never likely reach again. Hope they don’t have any regrets.
Posted by Andrew Childers at 6:53 PM

Thank you for posting this. I've really gotten to like the mp3 you posted. It's not very often that I get pointed into new bands I like a lot.