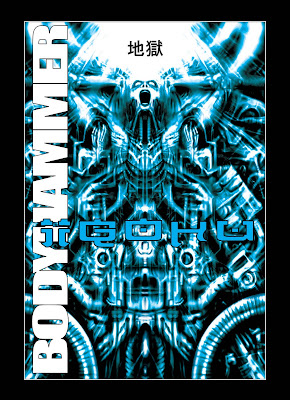 Body Hammer
Jigoku
The Path Less Traveled
A DVD package. Striking blue-tinged art. Exotic fonts. Lyrical themes five-fingered from the cream of bizarre Japanese horror films.
Any of this starting to sound at all familiar?
But the packaging, as with every other aspect of Body Hammer is deceptive. Instead of a Jason Voorhees-style shrine to Jon Chang’s shriveled, severed cocoanut, Body Hammer arc welds one man electro grind experimentation to fx box abuse with the kind of hellbound vocals Alan Dubin hears in his more pants-shitting night terrors. Relevant touchstones would include Agoraphobic Nosebleed, Khanate, Merzbow and the almighty Godflesh
Jigoku, meticulously crafted over three years by student Ryan Page, is an album with a definite entropic direction. It steadily moves from its anchor in electroshocked grindcore to a rootless heat death by smothering, abstract electronics, buried under waves of collapsing sound. Decaying as the tempos slow, percussion erodes leaving only Page’s digital demons to run loose in the crossed circuitry of his burned out id. Balanced on the precipice between the relative grindcore order and white noise chaos, the blast to blaze tune “It’s Not Even Human, Shove it Back in” is the very heart of Jigoku’s synergistic contradictions.

Body Hammer – “It’s Not Even Human, Shove it Back in”

Jigoku is twitchy, convulsive and increasingly paranoid as it builds layer after layer of discomfort. “The Bystander Effect,” “Blue Eyed Assassin” and “The Principles and Practices of Nihilism” (2 second grind filtered through Page’s laptop deconstructor) are all comfortably anchored in grindcore. But that paranoia starts gnawing its way through your psychic defenses early on. “Digital Direct Drive” is a purgatory storm of barely heard croaking always just over your shoulder and malevolent electronic detritus.
For sure this is not going to be album for everyone. However, for someone so young, Page has married both an impressive musical focus to legitimately engrossing artistic conceits to unleash an unsettling foray through the decaying mounds of castoffs that capstone our planned obsolescence society.

this body hammer, Is really wonderful. I prefer this kind of DVD package. It is very exotic. I like the lYrical themes .

Ryan sent me his next-to-last copy and I'm obsessed with it. It's excellent. If you enjoy your metal experimental, download this and II: The Mechanism of the Night immediately, (Jigoku's follow up) you'll be glad you did.