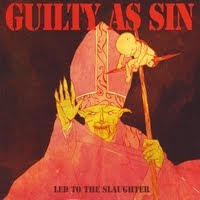 Guilty as Sin
Led to the Slaughter
Self Released
Massachusetts trio Guilty as Sin bill themselves as “biker/Viking metal,” which appears to be a euphemism for instrumental thrash/proto-death metal with the occasional splash of prog and world music. So yeah, I guess “biker/Viking metal” is a lot shorter.
Though samples periodically stand in for the missing vocals, Guilty as Sin keep the focus squarely on the musical side of the operations and when that focus remains more on the thrash/proto-death aspect, things are adequately gruff and grumbly. “Carnivorous Intent” ably stampedes the gap between the overlapping styles. “Eagle Over Mountain” and “Reptile Agenda” crib from Metal Blade-era Slayer (“Reptile," in particular, nicks notions from “The Final Command”).
Where Guilty as Sin most ably manage to tame and master their influences is on “House Arrest,” a stamping rhino charge drums collide bodily with an opening blower bass and pick slide crescendo that detonates ringing glissades and brute force chug-a-lug. It’s a potent reminder that brute force is always as excellent choice when crafting a song.

Where everything goes horribly off the rails, unfortunately, is the Curse of the Final Song. Of that Guilty as Sin are guilty as charged. A full 25 percent of this 32 minute album is consumed by “International Selection,” an interminably meandering faux Middle Eastern bit of annoyance that plunges straight into every bad stereotype you associate with an instrumental metal band, which Guilty as Sin had heretofore deftly hurdled. Everything just gets bogged down under the weight of the chimes, gongs, and electro-music trappings that are really there just to remind you these guys once enrolled in that world music appreciation course. Tell me, what kind of bikers and/or Vikings do you know who get down with a flute?

[Full disclosure: Guilty as Sin kindly provided me with a copy.]
Posted by Andrew Childers at 6:37 PM

I tend to be skeptical with these sort of fusion hybrid bands, however from the track you upped, these guys seem to have talent alongside uniqueness. I think I will be acquiring this album, you have triggered my curiosity