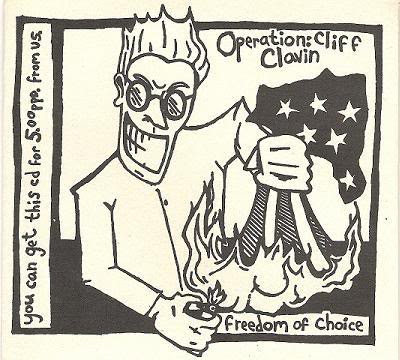 Operation: Cliff Clavin
Freedom of Choice
Plan-it-X
1996
You know that guy you met freshman year of college who had just discovered Noam Chomsky and Howard Zinn (RIP) and suddenly felt qualified/compelled to weigh in on every aspect of America’s geopolitics? Hell, a few of us probably were that guy (hopefully most of us got better, Zinnions being the Randroids of the left, and all). But Operation: Cliff Clavin is what happens when that guy makes a record.

Freedom of Choice is the kind of punk record you ended buying plenty of back in the 1990s when you were a bored teen who randomly ordered shit advertised in the back of Punk Planet, seduced by the hand-drawn art, obvious DIY ethic and the promise of two minute diatribes of toe-tapping lefty teen angst. While few of those records survived my various moves through the years, Operation: Cliff Clavin has managed to stick it out, even when I go years between spins.
Op:CC aspired to be Indiana’s answer to Propagandhi but ended up with a hilariously entertaining mash of earnest sloganeering and truly atrocious back up vocals that succeeds because of – rather than despite – it’s painfully DIY flaws. From the goofball art, personally answered letters (I know because I remember writing them about one of their albums in an era before email) and Xeroxed liner notes, this is the kind of self-produced record that’s pure anachronism in an age when all you need is a laptop to get your band out there.

Smart ass punks that they were, the band close their album with a quartet of goofball covers, including probably the best rendition of Poison’s “Every Rose Has its Thorn” you’ll only be slightly less ashamed to admit loving. And you just know Op:CC didn’t bother to clear the rights on that one, which means Bret Michaels never got his royalty check, directly leading to Rock of Love. True Story.

Operation: Cliff Clavin - "Every Rose Has its Thorn"

A couple years later Op:CC would be back with second album - Paradise Lost - a new rhythm section, more sloganeering and even worse backing vocals.
Posted by Andrew Childers at 4:35 PM

digging the music player. now if only my connection would stop timing out i'd be all set.

seriously? that shit still happening? i thought i had the bugs worked out when i switched to lower bit rate mp3s. i'll take another look at it.

Ican't seem to get the songs to play either, however I will just download the tracks and listen. Coding is sometimes so annoying.