In With the Old; Out With the New: Nashgul Go Rummaging Through Grindcore’s Graveyard 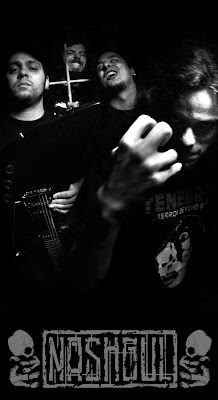 Like a zombie punching out a shark, Spanish grinders Nashgul know some things just never go out of style. Zombies have been the little black dress of grindcore ever since Repulsion first horrified a generation with gore-flecked tales of maggot-filled coffins, innocents being slaughtered and fear that lurks.
Knowing a good thing when they hear it, Nashgul have resolutely defied the last 20 years of cultural evolution, pillaging the festering cinematic leftovers of 1970s and ’80s for musical inspiration. These are guys who’ve written songs called “Mad Max” (which was renewed for a second season), “Snake Plisskin” and “El Vengador Toxico,” after all.
“I think 70/80s horror movies had a fucking great atmosphere of disturbing realism,” vocalist Santi said. “Special effects were fucking great before all this CGI shit and also being in our mid/late 20s these are the movies we grow up with. Old school grindcore and old school horror movies with some beer and weed. Anything better in life?” [Editor’s note: Only to crush your enemies, see them driven before you, and to hear the lamentation of their women.]
So it should surprise only those of you who haven’t been paying attention that Nashgul’s proper debut album, El Dia Despues al Fin de la Humanidad (The Day After the End of Humanity for those who no habla), comes off like a classic Fulci fright fest right down the awesomely festering artwork, courtesy of bassist Luis.
“He did all our artwork except the one for the split with World Downfall which was made by Emma Rios, a friend from our city who is now working for Marvel Comics!” Santi said. “Luis is professional drawer, he has a daily job drawing and designing. He improved a fucking lot during the last years, and I’m proud to say that is one of the best drawers you can meet in the music scene. He did lot of work for other bands.”
Not only do Nashgul think cinema peaked nearly 30 years ago, don’t look to them to blaze new grindcore trails either. As far as the band is concerned, grind also reached a state of transcendent perfection two decades previously and they just see themselves as acolytes of their predecessors.
“We don’t pretend to be original or innovate in any form,” Santi said. “With our music we just want to pay tribute to the bands we are obsessed with since many years ago. Of course our main influences are the classic grindcore bands like Repulsion, Carcass, early Napalm Death, Terrorizer, Defecation etc., but we are very open minded people, we love punk as much as we love metal. So there’s a lot of influences in our heads when we are making new songs, so maybe that make our stuff more interesting, because we don’t follow any formula or trend. We just make what our guts and heart tell us to do.”
Given Nashgul’s obvious mastery of the zombie oeuvre, I turned to Santi to settle a schism that has ended marriages, destroyed families, sundered friendships and driven nations to the brink of war: Fast zombies versus slow?
“Slow zombies, of course,” Santi said, forestalling the need for me to eviscerate him and declare his falsity to the grindcore masses. “There’s nothing more disgusting than knowing that a lifeless piece of meat filled with maggots is coming after you, and no matter how fast you can run, no matter how intelligent you think you are, they have all the time in the world and they will end up surrounding you, approaching to you very slowly and eating you alive without any hurry. Return of the Living Dead fast zombies are the exception. That movie rules so much, it’s a fucking great classic parody!”
Posted by Andrew Childers at 6:36 PM

Probably the best and most exciting interview ever. I bet that was stupid fun to write.Grind, weed and women.

santi was pretty hilarious. that guy just leaped bodily into every question i asked him and it shows in their music as well.

I wonder who they are taking in El Classico tomorrow. I hope it's a high scoring draw.

And I appreciate the editor's appreciation of Conan.

Thumbs up for the Conan reference, I like the fact they are entrenched for Inspiration, however don't watch the Toxic Avenger, possibly the worst film ever

Troma rules! Didn't you ever watch the cartoon!?

This was a good read.

I interviewed them sometime last summer before the LP came out. You can read that interview on dontbeswindle.blogspot.com

oh shit, will. i never realized you had a blog. consider yourself linked. also, nice interview.

excellent job. zombies conan and grindcore can't go wrong! return of the living dead and dead alive are def two of my favorite movies ever.