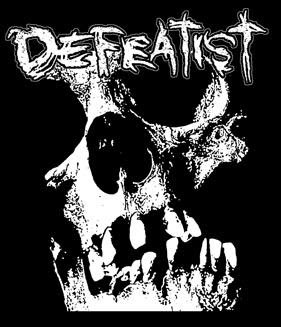 With a population density of 26,403 people per square mile – 66,940 people per square mile in Manhattan alone – that’s a lot of potentially homicidal motherfuckers stacked on top of each other in New York City. New Yorkers walk fast, they talk fast and they really don’t have time for your bullshit. Combine all that with near legendary (though in my experience, highly exaggerated) animosity for everyone else around them and Hells Kitchen up to Harlem should just be exploding with blastbeat freaks with no regard for humanity. Though the city’s macho strut has brought the world NYDM and NYHC there seems be a palpable lack of NYGC (and yes, Zmaj has already poked some holes in this hypothesis). The city’s leading lights, Disassociate and ASRA are both moribund. In fact, the region’s best grindcore has come from a bunch of bridge and tunnel types from Jersey. Fucking Jersey!
So I put the question to Aaron Nichols, grizzled vet of upstaters Kalibas and now fronting last men standing Defeatist: What’s up with New York grind?
“NYC is pretty fucked up and splintered, the cliques get split up amongst boroughs, styles or just bands,” Nichols said. “There are little pockets that erupt here and there but it's usually based on being in a scene as opposed to being into the music. More than a few times I've been at a show and not recognized any of the people attending and will probably never see them again. I'm actually surprised any scenes survive at all because it's so hard to even keep a band together here. Every hardship any band I've been in before is multiplied significantly just by living here, from expenses to scheduling to transportation. Most bands here seem to be more interested in partying and spreading their herpes than anything, which is probably the opposite reaction we would inspire. As a transplant to NY there was definitely an adjustment period living in such an oppressive environment and it had an impact on me but I think
that has come out through lyrics more than the music.”
But as some syphilitic German loudmouth once put it: what doesn’t kill you makes you stronger. Which is a pretty epigrammatic summation of Defeatist’s full length debut The Sixth Extinction. Building on paleontologists Jack Sepkoski and David M. Raup’s research in the cyclical nature of extinction events approximately every 26 million years. Given the last extinction event in their cycle was the Cretaceous-Tertiary extinction event about 65 million years ago, we’re a tad overdue. But Nichols is banking on humanity’s endless ingenuity for self destruction to right the scales.
“I would go further than that and define humanity as the extinction itself,” Nichols said. “Niles Eldredge breaks down the phases of the Sixth Extinction into two phases, the dispersion of humans across the planet and the development of human agriculture. It is the human-centric view that the next extinction is something that will happen to us as opposed to something we have caused. None of this is any sort of condemnation, just fulfilling human nature. The idea of accepting fault is more appealing to me than the actual event I guess because that's just inevitable, at least I hope it is.”
That sense of inevitability is what I’d call the defining feature of Defeatist’s music. Each album has been stamped by Nichol’s distinctive iconography of gritty black and white visions of death. Skulls and skeletons abound. Life does not seep in through any crack in Defeatist’s bleak world view.
“I'm just starting to realize that there is an aesthetic theme emerging in the artwork,” he said. “Really it's nothing any deeper than my love for fucked up punk aesthetics but I do think the Momento Mori suggestion has some validity. I will almost always go for a shitty cut and paste layout over a high production full color painting. Growing up, I always preferred black and white comics over four color mainstream books too. It's completely subjective though because I'm heavy into work from Hipgnosis or Roger Dean too. I guess influences in this world would be Winston Smith, Pushead, Sakevi, Gee Vaucher, and the record covers that always stand out to me are the first Killing Joke record and Napalm Death Scum.”
While he has developed a distinct aesthetic for the band, Nichols said he still tries to keep the art anchored in Defeatist’s lyrical conceits. Luckily the words are just as bleak and the layouts.
“Conceptually, it's different each time but I usually only have a vague idea of where to start but somewhere in the process something will emerge that I wouldn't have thought of. Sometimes the art is a starting point, I had the front cover for this new LP for a while but the rest of the layout was a struggle. To me the whole point of the lyrics is to conjure visuals so I hope the layout will support that.”
Given the 2008 econo-pocalypse made a mockery of whatever hilarious fever dream I ever had of one day retiring and Defeatist are convinced we’re inevitably going to wipe ourselves out anyway, I asked Nichols whether I should bother building up that 401k again or just empty it out and carpe that diem.
“Do apocalypse kooks have retirement plans?” he said.
Posted by Andrew Childers at 6:25 PM

You could replace "New York", with London and the article will still stay true, other than the fact Defeatist aren't from London

If I cared a jot about social networking this would be all over my facebook, myspace twitter accounts.

But more on that Momento Mori comment? Is that the Latin expression or is there something deeper I am missing?

it's latin for "remember death." just a friendly reminder you're gonna kick it one day.

wait, i think i get what you're saying now. yeah, i asked aaron if his art was deliberately a modern take on momento mori since every album has had some variation on the same theme.

Spam has taken over the comments in The Inalienable Dreamless. Nuke that garbage.

that band stole that artwork, its iskra's. they did, this guys rip them off.