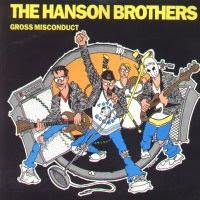 Hanson Brothers
Gross Misconduct
Alternative Tentacles
1992
So it’s another Stanley Cup playoff and I’m left to play the “who do I hate least” game (Detroit and Chicago can go fuck themselves to death!) because my pitiful, underachieving can’t buy a fucking goal at home Blues couldn’t crack the top eight in the west. Again.
While my Al MacInnis jersey will like stay in the closet this spring (considering D.C.’s temperature and humidity are both 90, that’s probably a good idea), the postseason is always an excellent reason to crack out my modest store of “puck rock” classics.
At the top of that admittedly limited demographic would be the Hanson Brothers. No, not those fucking “Mmmbop” twats. Actually the Wright brothers from NoMeansNo and a handful of accomplices, the Hansons, named after everyone’s favorite cinematic goons, the Hansons hit upon the absurdly gleeful admixture of songs about hockey, beer, girls, hockey players who like beer, girls who drive Zambonis and glove dropping brawls back in 1992. When everyone else was moping to the tunes of a Seattle suicide, the Hansons just wanted the world to lighten up and have a little fun. And did I mention all the songs are loving Ramones homages? Even to the point of parodying DeeDee’s distinctive yelp in the background.
True romantics, the Hansons lard Gross Misconduct with songs about robot girlfriends (“My Girlfriend’s a Robot”), brain dead girlfriends (“Comatose”), imaginary girlfriends (“Jack Off”) and that awesomely cute chick who drives the Zamboni between periods (“Sabrina”) all done in that distinctively toe-tapping Ramones style.

But no puck rock band worth their foil-wrapped knuckles if they couldn’t bring it on the ice and the Hansons crash the boards with the power play menace of instrumental “Total Goombah,” the game face grimace of “No Emotion,” and (again, fuck the Red Wings!) the Russian Red Wings hatin’ bench clearing anthem “Duke it Out.”

Hanson Brothers – “Duke it Out”

Oh and they also rewrite “Blitzkrieg Bop” as homebrew anthem “Blitzkrieg Hops.” You just can’t fuck with that. If the Hansons don’t beat you on the ice, they’ll beat you in the alley.
Posted by Andrew Childers at 7:01 AM

Love this album, and "Comatose" is one of the funniest, catchiest songs ever.

Can we all root for a Vancouver - Montreal final?

mule: i was *this* close to going with "comatose," but "sabrina" was more directly hockey related.