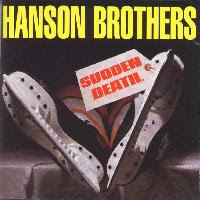 Hanson Brothers
Sudden Death
Konkurrent
1996
Go to any hockey game and you’ll likely see a bunch of bandwagon jumpers spilling overpriced piss water beer on newly bought jerseys sporting the names and numbers of the flavor of the month scoring champs and set up men. Living in D.C., that means every third person on the street is wearing an Ovechkin or Semin jersey. (Dr. Heimlich please pick up the white courtesy phone. The Verizon Center called about a choking victim.)
But you know you’ve spotted genuine hockey cognoscenti when you see someone sporting the jersey of a beloved local enforcer. [As a lifelong, die hard Blues fan I’m contractually required to own a shrine to Tony Twist and Kelly Chase.] So when the Hanson Brothers penned an acoustic ode to NHL penalty minute king Tiger Williams on second album Sudden Death, I can’t help but nod in approval even if he was briefly a fucking Red Wing. It’s the kind of song that on the surface is just another goof on hockey but is shot through with genuine admiration for a fan favorite.

Hanson Brothers – “He Looked a Lot Like Tiger Williams”

As an album, Sudden Death may be a tad less freewheeling than Gross Misconduct, but damn if the humor and songs aren’t more focused as they pen ditties to beer (“We’re Brewing”), impotence (“Not For Mary Lou”) and the women in your life [like my wife] who just can’t comprehend how you can spend nine hours a night during the playoffs watching game after game (“Danielle (She Don’t Care About Hockey)”). While NoMeansNo is plenty of proof the Wrights are no strangers to their instruments, Sudden Death was the first time they brought that same sheen to their punk alter egos with touches like the aforementioned “Tiger Williams” ballad or the bouncing puck skitter of the guitar solo on instigating minor mantra “Third Man In.” The band even rips an opening cover of the Hockey Night in Canada theme (aka “The Hockey Song”) that’s boisterous enough to be heard over Don Cherry’s loud-ass suits.
Posted by Andrew Childers at 7:43 PM

Just would like to say that it's good to see a hockey fan. I'm a Flyers fan and it's not looking good for me, hopefully they avoid the sweep tonight, but my best friend is a Blues fan and they're a good young team to watch with EJ and Oshie. Cheers!

i fell asleep right before OT started on the flyers game, but i'm actually shocked how they've played against boston. that's a team they should dominate.

Flesh was dead on about the Sharks. I thought they were the bandwagon favorite but they are game planning well right now.

i was wondering how they would respond after getting their asses handed to them in game 5, but damn if they didn't bounce right back.

and by game 5 i of course mean game 4. good going retard.