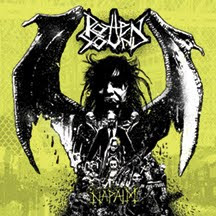 Rotten Sound
Napalm
Relapse
I love the sound of Napalm Death in the morning. You know that ridiculously fast punk and hardcore sound? It sounds like … absolute fucking rage.
Which is why I must bow down before Rotten Sound in worshipful rapture. As tourist season descends on D.C. yet again my morning commute is being snarled by fat fucking Midwestern families in fanny packs and matching T-shirts who haven’t bothered to read a fucking Metro map and who amble around the subway system blocking doors, loudly irritating the workbound office drones and vociferously expressing their dismay when they find out the National Mall isn’t the kind with an Orange Julius and a Hot Topic. (Recently overheard retarded question on the Mall: Which building is the Smithsonian? Allow me to help you with that, fuckwit.)
Sorry, I just needed to vent.
So copious amounts of Rotten Sound’s loving tribute to Napalm Death have been a much needed morning train pressure valve ever since the cherry blossoms bloomed, signaling the start of the allergy season and the tourist onslaught.
While it has to be said Rotten Sound’s covers of “The Kill,” “Missing Link” and “Suffer the Children” (a nice sampler of all the band’s eras, including the Barney years so reviled by the tr00 grind set) add absolutely nothing new to the eleventy billion other cover versions floating out there, the songs get the thorough beating you would expect. Eschewing the cleaner sound of Exit and Cycles, Rotten Sound rough things up sonically with a throwback to their Murderworks sound. That bruising gives this EP’s three originals a menace and energy I’d honestly forgotten the Finns used to have. The three originals on the EP also siphon off that renewed sense of urgency with a punkier immediacy than we’ve seen from them in the past couple of years. Hell, the song titles – “Mindkill,” “Brainload” and “Dead Remains” – sound like outtakes from Miles Ratlidge’s high school notebook.

The bonus DVD capturing the band’s rain drenched 29 minute set at the 2007 Obscene Extreme fest is also a treat for those of us who never managed to catch the band live. Mika Aalto’s grisly SG has a rusted razor wire sound perfected by NOLA sludge monsters and the band live is tighter than a ravenous anaconda pouncing on a sandwich. The multiple cameras provide a nice dynamism that makes up for the fact that it’s pretty much half an hour of bald guys standing in place with the occasional headbang or guitar swing. Rotten Sound are also clearly veterans at manipulating the audience, ratcheting the tension until the explosive combo of “Targets” and “Sell Your Soul” closes the show.
Face the truth this is no farce.
Posted by Andrew Childers at 6:45 PM

Rotten Sound also do an amazing cover of Reeks of Putrefaction.

I had that opening sentence in my head, but you got it down in "print" first! This release is indeed quite the release. What a rager.

and here i thought i was going with the blindingly obvious because i couldn't come up with something better. great minds etc.