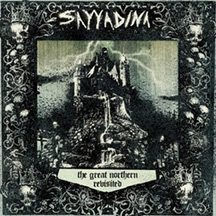 Sayyadina
The Great Northern Revisited
Relapse
I revisited the Great Northern, myself, recently with a marathon reviewing of David Lynch’s Twin Peaks, and I can vouchsafe Sayyadina’s odds and sods compilation for Relapse sounds like it came howling out the Black Lodge with murderous lunatic Bob.
Not nearly as fluid as their later work, Sayyadina on The Great Northern Revisited is a more spastic, gangly and all around punk version of the Swedish grind stalwarts. Actually, I was rather startled at how much Sayyadina sounds like Afgrund, particularly on some of the later tracks collected here.
Though not as refined as I would come to expect from them, Sayyadina were flashing all of the hallmarks of master songsmiths fairly early on. “The Awakening” nimbly catapults from punk into drone before caroming into a grindcore spring in a flash forward 74 seconds.

“Nar Jag Faller” is all assault rifle spray and shattered gristle while “All This Fear” is a convulsive purgative exorcising anxiety with an explosive rage.
But all of that is to be expected. What was most intriguing – and most apropos given the David Lynch allusion – was the unexpected jazz excursions of “Retaliation” and “Outrage” which could have not only soundtracked the Lynch film of your choice but key scenes from Jean-Pierre Melville’s classic heist films as well.
At this point Sayyadina is fairly firmly established in the cannon of Swedish grindcore, and that’s what makes The Great Northern Revisited so intriguing and successful. Even bands that stomp the terra with Godzilla sized sneakers started out with baby steps.
Posted by Andrew Childers at 7:00 PM

Labels: grindcore, how swede it is, relapse, reviews, sayyadina, the great northern revisted

I always struggle in wondering whether these guys are more crust or Grind, either way I do love this, glad that they made this compilation, saves me having to track down all the splits, and saved me a bit of cash.

Saw them play at a house show in suburban NJ, about 45 east of Philly in May of last year. Amazing band.

With Defeatist and Kill the Client no less.

I picked this up a while back and it's my first exposure to the band. I now have their last LP coming in the mail, as well. Incredibly fucking cool band, the sonic incarnation of the united forces SOD touted.

seriously scott, you get invited to all the best parties.

and bill, definitely check out mourning the unknown. another great album. it's especially awesome cuz there's these lyrical threads running between songs that even the band didn't realize were there until i asked them in an interview. it's one of the most intelligent and honest grind albums post-discordance axis.

That's the album I ordered after hearing "The Great Northern Revisited." Should be in my mailbox Monday (fingers crossed).

Your interview with them was what spurred me on to check them out in the first place, actually. Their lyrical bent is interesting and refreshing for the genre. I'm a sucker for leftist sloganeering, for sure, but it's nice to have someone bring the focus all the way down to a personal level, much like Nasum would occasionally do.

Your blog turns me on to a lot of stuff I would otherwise be totally ignorant of, so keep it up, dude!