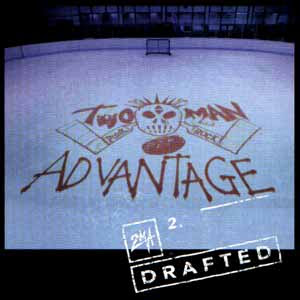 Two Man Advantage
Drafted
Royalty
1998
The last hockey-themed post for a while (I promise), so what better sendoff than an album that swipes from Slap Shot right from the puck drop.
Befitting a bunch of Islanders fans, Two Man Advantage took a more blue collar angle on the whole “beer, hockey, girls” puck rock shtick than the Hanson Brothers. Why go to all the trouble brewing your own when you can just call for the beer ban between periods (“Beer Man”), marvel at your collection of empties (“Beer Today, Gone Tomorrow”) or just say fuck it and grab a bottle of Captain Morgan (“Captain Morgan”). They take a similarly direct approach to the whole girl aspect as well (“Pornographic”).
All well and good, but a puck rock band lives and dies by the quality of its on-ice repertoire and 2MA bring the hardcore with occasional melodic flourishes with the grace of a Guy LaFleur end to end rush (the sharp eyed perusing the album art will also spot the Assuck shirt peaking out from under bassist Teemu Heineken’s Two Man Advantage jersey for extra metal cred).
The guitars are gritty and grisly as the band (whose stage names are largely a combination of alcohol of choice and all stars of the 90s) racks up a Gordie Howe hat trick with the trio of dynasty-era Islanders homage “Hockey Fight (Clark Gilles),” “I Had a Dream About Hockey” (seriously, who doesn’t?) and the lamp lighting “Skating Down the Ice” which sports a charmingly melodious chorus and displays far more grace than you’d expect from a collection of beer league hockey bums.

Hell, these guys are so dedicated to hockey goofery, they once pissed off the Zamboni company. Clark Gilles would be proud.
Posted by Andrew Childers at 7:21 PM

for real. incredible game watching them dismantle the pens. how can anyone not wanna get on this bandwagon?