Blood In, Blood Out: Dutch Grinders Ask, What’s In a Name? 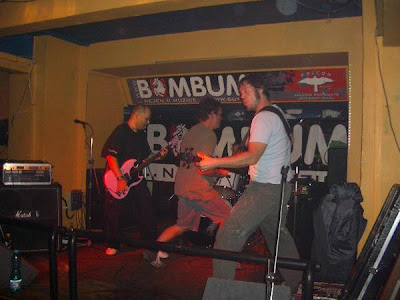 You know that Shakespeare quote about names and roses? Yeah, that one. Well, I will not be breaking that out because it’s trite and overused, and that would just be fucking lame on my part. Because for the last 15 years Shantia, Rosco and Bert have consistently been banging out music so awesome – no matter under what appellation or backed by what drummer – that they deserve something better than a tired cliché.
Whether the beats were blasted by Ype or Henk under the name My Minds Mine or Blood I Bleed, the Dutch outfit(s?) have been playing some of my favorite grind, especially of late. In fact, the growth and continuity between the bands is no coincidence, guitarist Shantia said.
“To start this off, I must say that MMM consisted of four mates with no important jobs, no kids or other time consuming factors. This led to lots of practicing, gigs, some tours and some recordings,” he said. “At the time we were quite close and all I can say about MMM quitting is that in a later stage there were tensions between some people which led to disbanding MMM. Also Rosco was out of the picture for a while as he had problems with his vocal cords (what a coincidence, heh?), which led to a temporary break for him. We continued MMM under a new name and with a new drummer. As you will understand this was all out of respect of our old drummer Ype, who we've known since we were 15 years old. For me BIB is basically the same band with the same ideas and plans and I wonder that if we have to make this decision ever again we will do the name change again or stick to the old name.”
Considering the musician carousel that characterizes Napalm Death or Extreme Noise Terror in most people’s minds, that’s an amazing act of loyalty in the face of a single changing member.
Whatever they choose to call themselves, like Nasum before them and Wormrot after, Blood I Bleed have that rare gift of crafting actual grindcore songs. You know, songs that actually stand out, have memorable hooks, definable characteristics rather than just a 20 minute blur of blasting noise. Not that there’s anything wrong with that. Again, Shantia said that’s by design.
“The riff, hook, bridge, start, ending are all looked closely at to make one song ‘different’ from another,” he said. “Indeed this is tricky, as we are just playing grind/hardcore, right? And I don’t think people expect too much experimental shit from a band like us. Lately we try to bring in Bert's vocals as well to make things a bit more hectic. As far as the hit-score; you never know until you play songs live or get feedback after you made recordings. From crowd reactions we understood that a song like ‘Bring Me His Head’ is quite popular. You know, slow starting, 1,2,3,4! and all hell breaks loose.”
Given the clear craft involved, I was surprised to learn that one of my favorite aspects of My Minds Mind/Blood I Bleed songs – the use of feedback as a songwriting tool – was not as deliberate as I imagined given how much it complements a tune like “Insensible We Are.”
“I love this squeaking tone and it just fits good in some songs,” Shantia said. “If it was up to me I would start one song with feedback and let it run all through a 30 second song. It is not a deliberate part of the songwriting, it just happens/gets added when we rehearse new songs.”
Shantia might get his 30 second feedback song chance in the near future because Blood I Bleed are steadily writing new music for a slew of upcoming releases.
“At this point we are writing new songs and lyrics,” he said. “We have 9 or 10 songs ready and the intension is to record about 20 songs again after summer. We have been asked to do a split record with Lycanthropy and we will probably do that after the new record.”
Posted by Andrew Childers at 8:29 PM

damn, i don't know why it's taken me so long to check this band out, but i'm glad i finally did. This is what grind should be.

so after doing a whole interview with the guy, shantia pointed out that's not him on guitar in the pic above. that's actually richard johnson from drugs of faith. bib added an enemy soil cover to their set during a recent tour with dof and richard pitched in on guitar.

good going, fuckface. next time pick photos with your glasses on.

I love these bands. You're right about the songs standing out (i've had face first stuck in my head for over 2 years) amongst the mind numbing blast that grind sometimes is. While I dig that stuff, this reminds me of the salad days thinking i knew everthing about hardcore and then discovering bands like charles bronson or spazz, with mouth agape only able to utter,"what the fuck!?!?"