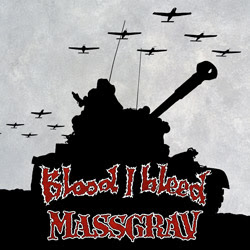 Blood I Bleed/Massgrav
Split
Selfmadegod
What happens when you strike when you strike Swedes Massgrav’s flinty crust grind off of Dutch masters Blood I Bleed’s steely grindcore chops? You’re going to cast enough sparks to set Northern Europe ablaze.
Though constrained by a more muffled production job than on Gods Out of Monsters, Blood I Bleed still circle a carcass like a school of starved bull sharks. Shantia’s songwriting is still leagues ahead of his peers and the white noise scrawls I immediately associate with his work are deployed to devastating effect. “Slow Motion Apocalypse” detonates 30 opening seconds of atonal feedback that screws the song’s tension until it vibrates like a single twanging nerve that has to explode or burst into flame. And “Downfall of the Common Man” bleeds out on the pavement in an arterial spurt of amplifier anguish.

Blood I Bleed – “Downfall of the Common Man”

The band also drills down into their prior incarnation as My Minds Mine, exhuming a trio of oldies but goodies to brutalize all over again.
Over the second half of the 20 minute confab, Sweden’s Massgrav unleash another round of napalm over Stureplan with a multi-throated crust-grind rampage aimed at people who though Anti Cimex were just too damn slow as harrow through hell on “Vagan Till Helvetet.”

Courtesy of a slightly more animated production job, Massgrav actually come off a touch more desperate and frenzied than even Blood I Bleed, raving like the Tasmanian Devil on a weeklong crack bender.
While they’re generally more comfortable cruising along at sub-Mick Harris speeds, the blasted, blighted and bastardized 16 seconds of “Lonesamtal – Legal Valdtakt” suggest the band recently pillaged a Stockholm dentist’s office and decided a drill bit would make a valuable addition to their musical repertoire.
Selfmadegod really outdid themselves roping together these two paragons for this split. This is where the 1337 m337 to blastb347.

[Full disclosure: Blood I Bleed sent me a review copy.]
Posted by Andrew Childers at 8:12 PM

Nice Review, perhaps someone who put this on too loud is what caused set off the volcano in Iceland. Just to borrow your wisdom a bit, is selfmadegod a record label made by a member of self hate, I don't know if its true but for some reason its in my head.

SMG is owned by Karol. He did put out a Self Hate release, but was never in any band.