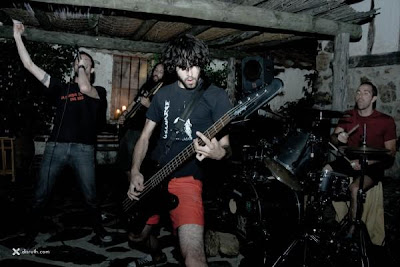 Looking for an Answer’s late 2009 surprise 7-inch La Caceria was a minor revelation for me and not just for the joy of seeing the Spaniards win Relapse’s backing. All well and good, but the true pleasure was listening to the band loosen up their assault, making it more feral and unpredictable over three new songs and a Repulsion cover. Extincion had been masterful bit of extrapolation on Nasum’s need to control – that precision that defined the Swedes – but the 7-inch was far more loose and rangy like early Napalm Death’s punk shocks.
In fact, guitarist Felix called the 7-inch “the best stuff we have recorded ever until now, music, lyrics and artwork.”
All of that gets even better when you learn La Caceria was essentially a demo for the band’s pending full length for Relapse. They band forwarded the four songs to the Pennsylvania major label after learning from friends in Suppository Relapse was scouting out new bands.
“Well it is the demo, but it was re-mastered for the 7-inch EP version,” Felix said. “The sound of the original demo, it’s rawer than the 7-inch EP for sure. But we really love that kind of sound, raw and intense. That´s 100 percent grindcore.”
The deal only runs through the upcoming longplayer for the time being, but Felix said the band intends to maximize the shot Relapse is giving them by building on the intensity and aesthetics of La Caceria. 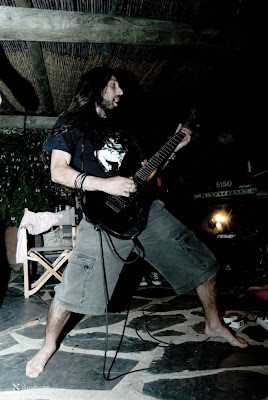 “I think we have improved in some facts like the intensity, velocity, dirty sound and lyrics written,” Felix said.
Looking for an Answer’s blend of gore grind imagery, vegetarian sloganeering and whipcrack grindcore intensity should also make them a natural fit for the Relapse stable.
“Definitely. We are not a gore grind band. We play grindcore and we have lyrics about animal liberation and veganism, that´s all. We are not an animal rights org just a band. We feel [it’s] necessary to write about we care.”
As a stubbornly carnivorous volunteer for the Society for Prevention of Cruelty to Animals, I’ll be the first to admit I have certain respect for the purity of Looking for an Answer’s ethical vision even if I won’t follow as far down the same path. However, where far too many grind bands are too content to spew invective without backing it up in fact, Looking for an Answer put grind to deeds.
“We are three vegans and two vegetarians in LFAA and we have not any other connection to the animal protection world,” Felix said. “I am also a volunteer in a humane society (feeding people from the street with no resources, homeless etc) and I also was a meat eater years ago, but I think that [it] never is so late to get the compassion as life style.”
Posted by Andrew Childers at 7:11 PM

I will be a Grind Fanatic till the day I die, but one thing I will never do is turn vegetarian or Vegan, no matter how good music Looking for Answer write (and it is very good), Nice review.

It looks like I can update the stupid fun I had getting wasted and blasting Earth Crisis back when I was a teenager!

I really need to check these fellas out.

you def should bill. especially if you enjoyed sayyadina. get your copy of mourning yet?

Yes I did! Totally blown away. Someone here said they couldn't decide whether Sayyadina were a crust or a grind band, and I agree with that. They can put up a wall of pure sandpaper and then lock into a lurching beatdown fucking seamlessly.

@Bill Willingham IV, Esquire
That was me who couldn't decide which one they belonged to, but either way its good stuff

Well, you were right on the money, bro.

And now that I've heard some of LFAA, I'd say the same applies. I haven't heard any of the early, Nasumish stuff, but that's a cool sort of progression. A lot of bands start out raw and then become more controlled. Like, uh, Nasum did.

i hear what you're saying about sayyadina straddling the crust line. you should also check out victims, it's a crust/d-beat band featuring half of sayyadina that is seriously good as well.