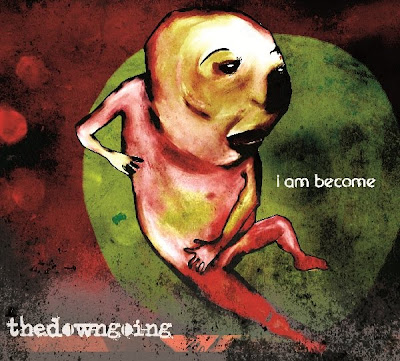 thedowngoing
I Am Become
Self Released
Physicist Robert Oppenheimer is what you’d call a glass half empty kinda guy. Reportedly the supervisor of the Manhattan Project during World War II turned to the Bhagavad Gita to sum up his thoughts following the first successful test of an atomic bomb, declaring: “I am become Shiva, destroyer of worlds.”
Welcome to the atomic age, boys and girls. Try to wear a happy face.
Australian two piece thedowngoing am become Shiva, destroyer of stereo components on self-released noise/grind holocaust I Am Become, a 13 track walkabout through an Outback of rusted cars, burnt out radios and decayed bits of a collapsed civilization.
“Thus Spoke” is a 38 second jab of musical nihilism and lyrical dissipation, but when two out of three of your top MySpace friends are Nietzsche and Charles Bukowksi, I’m not exactly expecting sunshine, lollipops and rainbows. The vocal devastation on the electro-jolted Khanate-meets-grind amalgam “Motionless” builds a fairly convincing case for demonic possession amid its wasteland death march. However, the deadite tinge to some of the vocals is certainly what we call an acquired taste.
The only weakness I could find is the drums tend to get lost in the production on occasion, particularly during the blast beat sections, but thedowngoing show their strengths as they stretch grindcore’s tempos and boundaries as with “29:23,” a snow blind blizzard of white out noise that recalls Body Hammer, and “Sunken Deep,” the album’s most composed and engaging song with its swarming snare and cymbal strikes buzzing like hornets around a trepanning drill guitar tone.
The band has made several tracks available for download here, and it’s certainly worth giving their Mad Max gone digital roadtrip listen or two.
[Full disclosure: the band sent me a download for review.]
Posted by Andrew Childers at 7:30 AM

If any of you want the whole album in one link it is here http://www.mediafire.com/?gmjonkmeizz
(The band sent me the link and said I could distribute it). Nice review, all your talking of atomic destruction has set off my urge for fallout 2, but not until I finish my review!

mediafire decided to delete the file for whatever reason.
download here: http://www.mediafire.com/?2gzntmdjngn