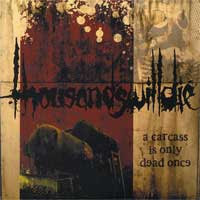 Thousandswilldie
A Carcass is Only Dead Once
RSR
2008
Now this shit is why I love grindcore. In most contexts, 25 songs would be a double album, probably some lame conceptual piece about the plight of Honduran coffee farmers or some other stupid shit. But this Rhode Island trio crammed all that on to a single 7-inch of early Anal Cunt-style blastcore goodness. Are there actual lyrics? Are there breaks between songs? Does any of that even matter? Fuck if I know, and I couldn’t tell you how many times I’ve listened to this. What I do know is A Carcass is Only Dead Once is a loving shout out to a time when Seth Putnam was still funny and those kinds of questions just didn’t matter.
Thousandswilldie is all gnashing tooth bass grumble and poorly soldered fuse box guitar crackle for its scant runtime. A slavering madman flicks spittle all over your mug as he gnaws his way through 21st Century decay and decadence. Shit, the frontman’s band photo is like a bald, shirtless anthropomorphic throbbing vein screaming a litany of your myriad sins at you for an eternity [See also: PKD's A Scanner Darkly]. With songs like “Bleeding Venom,” “Betrayer,” “Abandoner” and “Sister Gomorrah” you could be forgiven for mistakenly assuming you’d wandered into another tired hardcore finger point fest where some self righteous douche does his best (worst?) Ian MacKaye impersonation. Luckily, first impressions are furthest from the truth.
The tactical nuke up Thousandswilldie’s hoodie sleeve is their classic Agoraphobic Nosebleed grade sense of maximum outrage and sarcasm paired with musical concision. A sampler, the totality of “Hive Mind’s” lyrical observations: “It’s all a big pissing contest. Why don’t you just 69 it and gag each other?”
Ridiculously short songs that are well conceived, strongly executed and slathered with biting, ironic social observation – sure you can beat that dead horse a few thousand times, but A Carcass is Only Dead Once.
Posted by Andrew Childers at 7:59 AM

Labels: a carcass is only dead once, blastbeat from the past, grindcore, rsr records, thousandswilldie, united states

Don't belittle the plight of the Honduran coffee farmers, mate. They ground those beans like it was no one's business.

palme d'or winning documentary, absolutely, but in my grindcore? not so much.

Hey man. This is Mike Stitches (former vocalist of Thousandswilldie). Thanks for the hilarious review! A lot of those songs were my very first, lyrically, so they're pretty ridiculous. Then again, so is a 25-song 7 inch. We're no longer a band, but I've got a new project, standing on a floor of bodies. Free demo online.