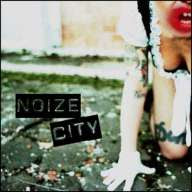 Various Artists
Noize City
Vox Populi
Now, I’m as much of a descriptive grammarian as the next person, but I have to admit the title Noize City caused a groan deep within that area where my soul would be if I hadn’t have traded it to Ba’al for a pack of Skittles and Slip ‘n’ Slide when I was 8. Please. Can we all agree to stop with the pointless misspellings in the name of some form of extremity? Please? Can we at least discuss it?
Given that it’s Dutch/Italian label Vox Populi’s first release and English is not their native language, I’ll let it slide for the time being. Besides, there are enough other crimes against humanity going on here to warrant convening hearings at the Hague.
Now I can enjoy the whole elctro-grind phenomenon, which largely makes up this nine band, 45 track collection, but I just found this whole exercise absolutely grating. I wanted to be supportive of a new upstart label, and I don’t mean to be a dick, but ye gods, this thing varies from the tolerable (Doctor Fecalus and Karnakkorok) to the absolutely annoying (pick just about anything else out at random) with the occasional detour into the unapologetically execrable for just good measure (ShitFuckingShit, who seem to think sampling gay porn and barnyard animal bleats on “Gay-Propaganda” counts as humor).
The opening songs by Doctor Fecalus featuring Karnakkorok are passable as they shred laptop cables and tonsils in a mash of sampled noise and drum machine stuttering. But I can’t help but think Gigantic Brain already did this better and with way less pointless scatology. Unfortunately, things rapidly go down from there. Jimmy Krap is appropriately named; his selections lack any sort of focus or memorable hook. Instead it’s simply an exercise in how fast can you turn up a drum machine. And did anyone really need a grindcore equivalent of “Disco Duck” with "Brutal Duck?" But easily the Olympic medal for annoying has got to go to ShitFuckingShit who puke out unintelligible garbles, unintelligible static in place of music and, unfortunately, all too intelligible juvenilia in the place of humor or insight (see the aforementioned “Gay-Propaganda”).
If that’s not enough to frighten you off, Vox Populi is making the comp available as a free download. Even if it is free, caveat emptor.

[Full disclosure: Vox Populi provided me with a download.]
Posted by Andrew Childers at 8:36 PM

I actually checked out Shitfuckingshit. I thought my speakers were fucked up, but the samples were clear.

Oh, boy: that label is looking for bands to do a Mentors tribute CD. Siiiiigh.

Oh damn. Electrogrind... the cover looks like one of those hipsters albums I hate, but feature girl singers I can't help but be attracted to. There is such a possibility for stupidity in the genre that really sounds like it manifested itself here.

Bright side is that it makes Body Hammer sound even more badass, though.

They sent me a copy too, I thought the kindess thing to do was to not comment on it and just post its link out there.

yes... anyway we just started a net record label for fun ,and for the love of extreme music , the goal was to make something stupid demently extreme , too bad you cannot understand the titles in trieste slang , we reached almost 2500 downloads,( unexpeced)with this compilation, the next comp will be out really soon and it we will be a totally diffrent monster , here the line up
el marrano , fermented fetus, porcky vagina,audio kollapse,P.R.O.S.T.I.T.U.T.A.,Reverendo Pig, Vaginal Cadaver,ENGORRIMENT ,Body Pollution,Fecal Body, napalm whores,OBSESI MATI,Trauma Moralis, goat eater,ROTTENCROTCH ,Swine Fucker,CRISISCHRISTH , Cunt Butcher ,NecrokIllgraveterror,Inphectus, LAMMASHTA,encee reefus,URINES ,bassookah,Zidovudine headache
thanks anyway to all the downloaders and grindpunishmenet to reviewed the comp ,AND YES WE LOVE EL DUCE AND THE MENTORS