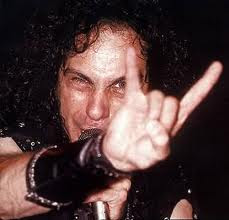 Consider this the spiritual flipside to my Punk'd post. While it's hardly remarkable for grind and metal bands to cover punk songs, there's not much traffic the other direction. However, it has been known to happen. And punk bands really have a fondness for Judas Priest for some reason. Here's four examples of punks who harbor secret feelings for the heshers.

Anyone surprised by Propagandhi's increasingly metallic bent since John K. Samson split for the Weakerthans either wasn't paying close enough attention to Chris Hannah's double picked riffing on the first two albums or is unfamiliar with Todd "the Rod" Kowalski's history in short lived grind band Swallowing Shit and seminal (heh) Manitoba punkers I Spy. The band telegraphed their love of '80s metal on the early efforts collection Where Quantity is Job #1 with a straight faced version of Venom's "Stand Up and Be Counted."

And just for good measure Propagandhi snuck a cover of Black Widow's 1969 psych-metal oddball "Come to the Sabbat" on to the end of Supporting Caste as a secret bonus track. That's just plain fuckin' weird.

I barely blinked when New Jersey punks Buzzkill covered Adrenaline Overdose's "Rock 'n' Roll Gas Station" on 1996 debut Up. I mean, sure why not? But I wasn't really prepared for an is-it-serious-or-is-it-ironic cover of Judas Priest's "Hell Bent for Leather." Not quite the same without the twin guitars, but an admirable effort nonetheless.

Finally, Meet the Virus, which formed out of the rubble of Naked Aggression, hid a cover of Judas Priest's "Breaking the Law" as a bonus track on their self-titled debut album. Jump to the 4:20 mark for Priestly goodness. It's an unexpected outing from a band whose members exemplified mid-90s gutter punk aesthetic.

Also, I need to say a quick public thanks to Albert from Know Records. That's the label that put out the Meet the Virus album. SoundCloud had originally blocked my attempt to upload the song because it said I was violating his copyright. I contacted Albert and with his kind permission I was able to get the song uploaded. Thanks to him for being very cool.

Hopefully you're not totally Propagandhi-ed out at this point. "With Friends Like These Who the Fuck Needs Cointelpro?" isn't a true metal cover, but pay close attention to the 1:36 mark where Chris Hannah screams "You've got another thing coming." With all the metal influences Propgandhi's already shown, try and tell me that's not a deliberate Judas Priest reference.

Posted by Andrew Childers at 7:45 PM

If you're really a pro, tell me, in "anti-Manifesto" what's that riff stolen from?

I can vouch for the fact the Rod is at the very least a huge venom fan...

in the liner notes to how to clean everything they thank concrete blonde and northern pikes for not being punk bands so nobody would know where they stole their riffs from. i'm guessing one of those.

Ah, thanks. My cds are all in lockup. was blazing through grind finale today and missed that beautiful booklet.