We walked along Beaufort Avenue to the centre of the estate. The herb gardens, the cheerful children's rooms filled with sensible toys, the sounds of teenagers at violin practice, were given an odd spin by the notion of imminent revolt. Most revolutionaries in the last century had aspired to exactly this level of affluence and leisure, and it occurred to me that I was seeing the emergence of a higher kind of boredom.

The suburbs dream of violence. Asleep in their drowsy villas, sheltered by benevolent shopping malls, they wait patiently for the nightmares that will wake them into a more passionate world... 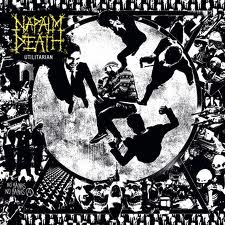 Napalm DeathUtilitarianCentury Media
When it came time for Napalm Death to record their fourteenth album, Utilitarian, apparently not a single fuck was given the day they hit the studio. After 20 years together, the current lineup has enough confidence in their grind-inflected death metal to fully indulge every musical digression that came to mind. The result, surprisingly, is their strongest album since Smear Campaign, and possibly of their post-Earache oeuvre.
From the Swans churn of opener "Circumspect," the Dimension Hatröss vocals of "The Wolf I Feed" and the saxual assault of Everyday Pox," courtesy of avant-jazz nutbar John Zorn, Napalm Death spread their musical wings further than ever. But between all of that, they've set to tape the most concise and focused death-grind tracks of their last decade. The rollicking "Collision Course," a fulminating ball of spite, is destined to be a live set standard and the 65 seconds of "Nom de Guerre" is the most pointed we've heard these Birmingham bangers have been since Lee Dorrian decided to trip back into the '70s.
Utilitarian finds Napalm Death sounding punchier than they've been in years. There's a jaunty spring to the quartet's step you wouldn't expect from a bunch of middle aged guys who still cling to death metal so tenaciously. Particularly reinvigorated is Danny Herrera whose thumping is somewhat shortchanged by a production job that stifles the snare drum, but the toms shudder with brain-rattling force. Over top him, Mitch Harris has never sounded so catchy as he bangs out one great crust-inflected riff after another. Mark "Barney" Greenway's phlegmy roar is augmented and counterpointed by new screams courtesy of his bandmates. However, Napalm Death's recent fondness for chanting gets way overused on Utilitarian in one of the few false steps.
Even if Utilitarian violates the 30 minutes or less rule, Napalm Death do their best to earn every extra second of their 48 minute runtime with an renewed intensity that makes me think they might have another 20 years in them.


Posted by Andrew Childers at 9:50 AM

I'm one of the people who is into late period Napalm Death, so I'l definitely be checking this out. I was a bit worried about the chanting, but I'm sure I can stomach it considering everything else that is going on.

totally agree with this review- easily their best in years...the chanting/clean vocals are pretty weak but easy to overlook...love that mitch harris is doing more vocals as well.

I'm slowly gaining an appreciation for this album. I've only given it a few, somewhat distracted, listens so far. Just wanted to give you full marks for the Ballard quotes!

Great album, definitely works its charms over repeated plays. Spot on with the chanting... bit overused this time around but everything else is so damn... catchy!

I loved Smear Campaign, but am kinda on the fence about most of their other post Dorrian stuff.

Time Waits had some awesome parts but could've been cut in half and been better for it.

This album totally kicked me squarely in both testes, though. Very cool.

really enjoyed this album...time waits wasnt very exciting to me. the chanting on this album doesnt bother me. i feel like it fits well with the songs.