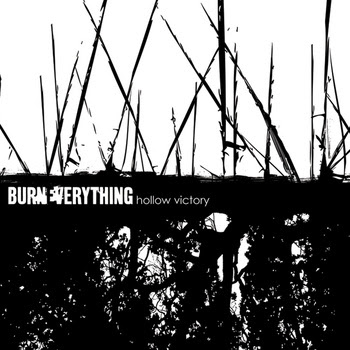 Burn Everything
Last Run Through the Ruins and Hollow Victory
Bandcamp/Dullest Records
Burn Everything are proof that a first class singer can really elevate a band, maximizing its potential on these two EPs. In the case of this Rochester metallic hardcore crew (comprised of ex-members of Fallguy), the screamer carries this band on his back, willing them to greater heights of hardcore with cries that erupt from straight from the lower intestine on songs like "Directed by David Lynch." This is confrontational, confessional purgatives in the vein of any band featuring Tim Singer (and that Burn Everything's singer sounds a lot like Mr. Singer is the highest honor I can bestow). The backing band even sounds a tad like Deadguy to me. 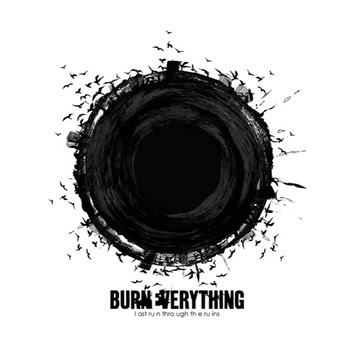 Not that they're musical slouches, but Burn Everything realize what they have standing at the mic and they fashion their instruments into a platform to display his spleen. The production gets the whole ensemble up in your grill, letting you feel the spittle flying and sense the fading twang of the strings. While a lot of what's at offering here will be familiar with anyone who's put on a random hardcore record from any time in the last 20 years, Burn Everything will themselves to a higher level of performance; they clearly mean this with every fiber of their slashing pick hands and every rattle of rubbed raw vocal chords.
While the vocals are a clear standout, Last Run Through the Ruins gives the band the space to shine on "Crumbling Monolith," a largely instrumental ditty with a cinematic tracking shot sweep overtopped by wordless female vocals. The song could be swapped in for the Toto score to Lynch's Dune for a climactic fight scene and it would only make it better.
There are a lot of hardcore bands but very few rise to the excellence of Burn Everything; this is a band that is simply doing all the little things right.
[Full disclosure: the band sent me downloads for their EPs.]
Posted by Andrew Childers at 8:56 PM

FUck yeah!! I opened for this band recently, and their vocalist is a monster!! Killer group.

I really like the instrumental part of this band..not blown away by the vocalist, but he is good. vocalist rarely blow me away.

You would think I paid Grind And Punishment to write this review! lol Thank you so much for the kind words!

The vocalist sounds like a screechy faggot to me.

well thanks for that insightful comment. we're all the better for your contribution.

Patronize me all you want, chief. You're the idiot who compared him to Tim Singer, whom he sounds absolutely nothing like, in ANY WAY. Thank god a powerful intellect like yours is publishing things on the internet.

with another 24 hours to think it over, allow me to explain. i prefer people to support their thoughts with actual arguments. take patrick up there. he disagreed with my take on burn everything, but he articulated why. you just came in calling people names. (and seriously, faggot isn't even an insult because there's nothing wrong with being gay).
so by all means, stick around, participate, make your thoughts known. but actually articulate an argument. we're all better for that.

hopefully that wasn't too patronizing this time.