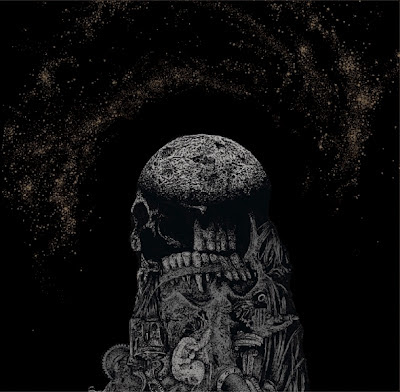 Wake/DephosphorusSplit7 Degrees
Wake and Dephosphorus are like grindcore Diet Coke and Mentos on this excellent split, featuring three songs from each. The unexpectedly volcanic pairing pushed the Canadian and Greek bands to excel, friendly competition bringing out the finest in both for the best split you're likely to hear all year.
Dephosphorus' three new songs are less spacey than their Axiom material. Instead, the Greek trio comes with a handful of more concise and single-mindedly aggressive songs. However, "The Cosmologist" retains some of the wormholed, time sliding twistiness of old. If they can marry this newfound intensity to Axiom's ethereal nature, Night Sky Transform will easily be 2012's most unbeatable album.
Panos Agoros' vocals and Thanos Mantas' guitar shred are both outstanding once again, but the biggest quantum leap forward comes from drummer Nikos Megariotis, whose snare work, in particular, is much improved and propels the songs with a newfound urgency. The blasting passages of "The Final Computronium" are things of beauty on par with a grindcore Parthenon. While the drumming on Axiom was competent, this split finds Megariotis driving and defining the songs in ways he never has before.
For their part, Canada's Wake continue their tradition of snapping up great producers. They roped Scott Hull behind the boards for last year's Leeches, but this outing they enlisted the knob twiddling efforts of Colin Marston. For all that star power though, Wake's half of the split sounds squashed and muddy, particularly in comparison to Dephosphorus. But it's far from fatal. While I would have preferred more definition, I can't deny that "Veil of Odin" is probably the finest, most dynamic song they've ever penned. The opening frame lopes forward like a wolfpack catching the scent of a bleeding deer, just a heedless, headlong rush. Sliding toward the end, the song downshifts into a midtempo jam, giving everything space to breathe. The interplay between the pounding toms and churning bass upheaval, garlanded by single guitar note feedback, might be Wake's finest moment.
Like there was ever any doubt, 7 Degrees has paired their two finest artists for a teaser platter, playing them off of each other in a way that shows off both Wake and Dephosphorus' finest attributes and set them up with a package to best show off their quality. These are two great bands that deserve all the accolades they've earned.

Posted by Andrew Childers at 7:35 PM

just to defend te sound of the wake side, the length is pretty much on the edge of the pressable for a 7", so the quality had to suffer a bit. i think colin and wake did a great job though...

Happy you feel the same about Wake's production as I do, i thought I was just being a bit too elitist.

It's a little muddy on Wake's side, but they still kill it!

And hearing new Dephosphorus is top-shelf titties, of course. And that artwork! Jesus.

thanks for sharing about the pressing, simon. it's technical stuff like that i didn't know before. it's cool to learn stuff like that, keeps it all in perspective.

Have been completely head over heels with this release, 2 exceptionally unique bands paired to make a great release. Still need to check out Dephosphorus' Axiom. Now to pair them off with Psudoku for some awesome splits ....

I thought the Wake side sounded pretty good considering it was done in a couple hours live off the floor.