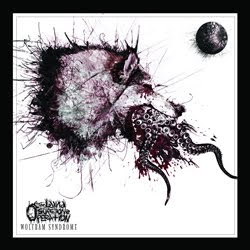 The Blind Surgeons OperationWolfram SyndromeTorn Flesh Records
My inner grammar nazi (and by "inner" I mean about two microns below the dermis) keeps itching to stick an apostrophe somewhere in The Blind Surgeons Operation's name. Just how many surgeons are there and how shall we establish ownership of said operation? But that's pretty much the totality of my complaints about Wolfram Syndrome, which speaks well of these Canadian grinders.
For the medically inclined, Wolfram Syndrome is a genetic disorder that causes diabetes, loss of vision and deafness. Wolfram Syndrome the album is more like an auditory interpretation of an epileptic fit courtesy of introduction "Me Gusta," which blinks, strobes, flickers and flashes through a pastiche of lounge jazz, dead channel noise and missing number dial tones. But once you survive that hallucinatory assault, The Blind Surgeons Operation grind like Maruta meets Parlamentarisk Sodomi with Mathias Huxley of thedowngoing chipping in guest vocals. Songs like "Second Degree Ghost" and "Pulling Teeth" just reek of that open grave stench that pervaded Eduardo Borja's best swamp water riffs.
If there's one hiccup to Wolfram Syndrome, it would be antepenultimate song "Organ Farmer," a seven minute slog that chews up The Blind Surgeon Operation's momentum. It's a plodding, throbbing single chord workout that sounds like something Floor would have tried back during their garage days. While The Blind Surgeons Operation keep the song shifting and moving, in context of the album it slams the whole affair to a halt as effectively as plowing your car into a brick wall at top speed. It's a relief when the demonic wind of the aptly titled "Ultraviolence" lives up to its name.
Despite that one detour, Wolfram Syndrome is a snotty, snarly ball of spiteful venom. Like the song said, me gusta.

Posted by Andrew Childers at 9:02 PM

I'm having flashbacks of reading Fuck on the Beach song titles...*shudder*

Being a big ASOIF fan the front cover looks like the Stark sigil devouring the Greyjoys sigil. (Sits pondering whether game of thrones love is another thing we grinders have in common)

I listened to this album last night and it just didn't click with me. I'll give it another spin sometime soon, though.

i watched the show but never read the books. they worth the effort? i was more of a robert jordan guy. dunno if i have time to get sucked into another compulsive reading series. verdict?

with andrew on this, love the show (although the s2 finale was way too condensed) but if I'm going to read long winded fantasy books i need to resume the Dark Tower series

i'm not really a stephen king fan (that's my wife), but man dark tower went really down hill after book four, right about the time king made himself a character. and despite being 800 pages, the last book felt really rushed and half assed.

Agreed with Andrew on Dark Tower. As soon as King started showing up I was over that shit. The Gunslinger was the best book in that series.

ASOIF is "realistic" fantasy, if that's a thing. Basically it is epic political intrigue with magical things happening at the fringes of the world, very slowly creeping in.

On topic, spun this again and still wasn't feeling it. They're unique, but for whatever reason it's not my bag.

Too flighty, I guess? I kept wanting them to really dig into one of those Maruta riffs and maybe throw in a mosh riff. That's not what they're about, though, which is fine.

Unless you have an aversion to themes of violence, murder, incest, rape, infanticide,gore etc then the books are not for you. Who am I kidding, you will love them!

when you say king made himself a character, are you referring to the crippled black woman with a bipolar disorder or the train that talks in all capitals? I've only read the first 3 and thought I needed a break.

negatory, my good sir. about book five or six stephen king makes himself a character and incorporates his horrific car accident into the plot. it is just as lame as it sounds.