John Woo's A Better Tomorrow was to gun-fu flicks what Discordance Axis' Jouhou was to grindcore: revolutionary turning points that are no less powerful for being endlessly copied. Both would shortly top even themselves (with The Killer and The Inalienable Dreamless, respectively), but here is where they both made their name. The staccato snap of Discordance Axis' "A Broken Tomorrow" puts me in mind of A Better Tomorrow's infamous restaurant shootout scene. Tagging along this time are signature songs "Aether Scalpel,""Tokyo" and "Flow My Tears the Policeman Said" which are mercifully better followups than A Better Tomorrow II ("eat the rice!"). Don't even get me started on that boring ass Korean remake. 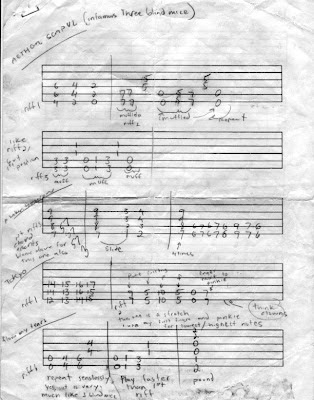 Posted by Andrew Childers at 6:22 PM

the whole resurrecting chow yun fat as the dead guy's twin brother was painfully insulting to my intelligence.

Because everything else in that movie makes perfect sense, right. :P

touche. let's call it the breaking point for suspending my disbelief.

I really like John Woo's HK action flicks, because there is this painful emotional intensity to it. Not in a realistic manner, of course, but in a kind of really low-end Punk chaotic kind of a way. I think emotion is at the center of the early John Woo movies, and that is what enhances the action to me. It's really about that expression, and emotional moments, rather then focusing on a coherent whole story.

I like you bringing those movies up together with Discordance Axis, because I think the emotional content, and the execution of that content, is what enhances the blasting music of DxAx. DxAx is gritty and honest, and it feels authentic to me. The expression of the HK John Woo flicks triggers much of what the intense, emotional Jon Chang jumpin', rollin' and screaming - that painfully aggressive expression is right there, and also the pain, fury and sorrow and is cried out through Chang's voice. The expression, man, the expression...

'Bullet in the Head' is my favorite John Woo movie, by the way.

Much love to you!

And yes, I haven't been eating and sleeping well. Gotta get some vitamins in me before grammar becomes even worse. god forbid.

actually when it comes to hk movies, i actually prefer johnny to or ringo lam. if i'm not in exactly the right mood, i find woo's overwrought emotions really grating. and i'm mpre of a late-90s takashi miike guy anyway.

but yes, movies and grind belong together.

I should probably halt right here, but one more Off-Topic before a new Monday, should be able to pass without punishment.

I totally feel you, and I've heard others say the same thing in regards to John Woo flicks. I dig Ringo Lam and Johnny To, as well. 'City on Fire', I think is the best Lam movie. As far as Johnny To, I really, really dig the first 'Election' movie, but his more action stuff doesn't really strike me as super thrilling, even though I still dig 'em, you know.

Love Miike, as well. I guess you're into Shinya Tsukamoto, too? There is a reason 'Tetsuo: The Iron Man' is sampled in Magrudergrind's 'Protocols of Anti-Sound'. Let's Go Get Them!!! Raaaaaahhhh!!!

we encourage off topic discussions around here. those are the best.