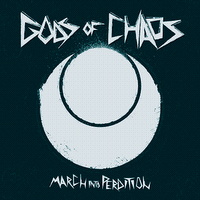 Gods of ChaosMarch into PerditionThe Path Less Traveled
So here's the deal: naming your band Gods of Chaos is a ballsy move. You're not advertising just human levels of chaos. No, no, my friend, promises of a divine chaos nature were made. Unfortunately, this Croatian band just don't deliver on debut album March into Perdition, a blend of grindcore speed and black metal ambiance that never rises above pedestrian over the course of 33 minutes.
Full Metal Attorney likened the band to Krallice, and I'll take his word for it because he's a smart guy. However, even though Colin Marston produced March into Perdition, none of his song craft rubbed off on Gods of Chaos. They have the blasting down A-OK. The problem is they leave no impression once they're done. The the closest they come to the promised chaos is the meandering drumming and droning guitars of "Crystallized Telekinetic Mindfuck," which was already done much better by Anodyne and makes me wish I was listening to The Outer Dark instead.
The remainder of March into Perdition is trebly guitar licks lacerating grindcore tempos, but after the spastic and enjoyable opener "Twitching Sours," Gods of Chaos just didn't evolve beyond that initial cross genre fusion. Every song seemed to fall into the same template laid out by "Twitching Sours," frigid buzzsawing, some stop/start action and back of the throat howling over top. When Gods of Chaos to mix up the playbook somewhat as on the plodding "Dealers of Nadir" or rock swinging "Skullfucking Despair" they drag it out until they've burned away the novelty.
Gods of Chaos have the knack for blending black metal and grind down. What they need to do now is widen their sonic palette and create songs that leave more of an impression. And drastically up the chaos quotient.
[Full disclosure: TPLT sent me a download.]

Posted by Andrew Childers at 7:27 PM

Thanks for the mention. I actually enjoyed this one quite a bit. It is bewildering and more than a little chaotic, but as you say it doesn't leave a lasting impression.