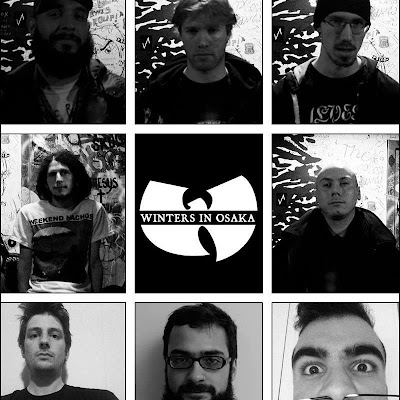 From one dude manipulating tape tones in his basement to the Voltronic intercontinental octet of anti-musical miscreants today, Winters in Osaka have reveled in carefully orchestrated chaos. Carving musical monuments out of found sounds and FX box noise, they expertly demolish their own constructions under unrelenting waves of white noise, turning their songs into harbingers of personal and social collapse.
Making chaotic sounding noisescapes takes a lot more planning and concentration than you may expect, especially if you want all of that confusion to actually take listeners somewhere. Despite the logistical nightmare of making space for eight different members and a who's who of grind and power violence royalty who jump in as time and space allows, band founder Adam Jennings said the song writing process remains remarkably simple.
"The song writing process is very loose to say the least," he said. "Lately, Andy Lippoldt and Jim Haras will send the base of what the track will be. From there, I usually add my layers to the songs, then send it off to the other guys. Some songs only have two or three of us on it, and some tracks feature all eight of us. I don't want the songs to suffocate the listener with all of us on the song. I like for the songs to come naturally, even though to a listener who might think all noise is the same, they might wonder [why] I give a shit as to who is on which track since it's all noise anyways. While we are a noise band, I feel that in the past year or two we have become a structured and focused unit, knowing how we want our songs to sound and what sort of feelings we want to invoke in the listener. We are a chaotic sounding band, yet the twists and turns and frequencies you hear are very deliberate."
While Winters in Osaka will never condescend to something resembling traditional song structure, the octet's most recent efforts have found them at their most focused. For all the noise and chaos, there are actual emotions at play behind the FX box abuse and the band is intent on conjuring a genuine response from listeners. Jennings points to their recent collaboration album with Japanese noise sculptor Astro as a significant turning point in Winters in Osaka's musical development.
"That release will be one I and other WIO fans will go to when documenting the progression from our earlier works to the newer, more focused sound," he said. "Our list of releases lately have gone down since we want to focus all efforts on releasing a tape or CD or vinyl that will keep everyone, including ourselves, interested. Too many people drop in and out of the noise scene because they burn out and then fade away without having tried new things on their own or with others." 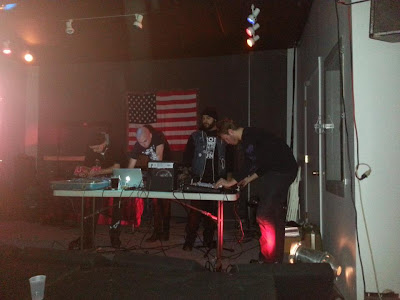 Like grindcore, power electronics revels in musical extremity and in making the kind of tympanum-piercing noise that sends all but the most hardened and adventurous listeners fleeing. So it's only natural that Winters in Osaka's list of collaborators reads like a cross section of fastcore heavy hitters, including seminal power violence personality Chris Dodge, Fuck the Facts' Topon Das, Rich Hoak, Jay Randall and members of The Endless Blockade and Iron Lung.
"The approach to WIO is different than your standard grind band, however the guys I have asked to collaborate have a rare energy and creativity that I thought would fit the albums that I asked them to be on," Jennings said. "I am happy to have worked with Chris Dodge, The Endless Blockade, Jon from Iron Lung and others. The Machetazo collab was very random. I don't know why I asked them, but Dopi was so excited for that release. He mentioned how it reminded him of some early Morbid Angel remixes. I am glad I asked them, because Dopi is one of the nicest people I have ever met. Dream collaborators would be a drone album with John Zorn and Merzbow, and I would also love to do remixes for Napalm Death and make some hellish noise with Gore Beyond Necropsy."
The interest in white noise often runs the other direction as well. Das said harsh sounds have always had a role in Fuck the Facts from the outset.
"Noise is actually a pretty big part of the Fuck The Facts history," he said. "If you go back to the very early days, when it was just me, there were a lot of FTF releases that were just noise. A couple of full lengths, a lot of FTF contributions to noise compilations and even a few noise splits were released."
In addition to contributing to Winters in Osaka on occasion, Das has also roped Jennings into contributing to his Merdarahta side project.
"I've gotten to contribute some sounds to some of the Winters In Osaka releases, and I've gotten him to contribute to my noise/doom project Merdarahta," Das said. "We've talked about doing more projects together, but with our busy schedules, nothing came of it." 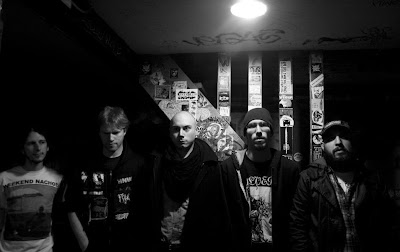 Nothing ever lasts in Winters in Osaka's world; witness the albums Mutual Collapse and the recent Monuments Collapsing. Intentional or not, Jennings said decay and disaster have often provided the unifying themes for the band's outlook and music.
"Mutual Collapse was written at the time my grandmother died," he said. "She was my best friend and biggest supporter and that record is about the vices and addictions I found myself dealing with during that time, the walls around me caving in and not giving a fuck that it was happening. Monuments Collapsing is about statues or temples or ideas in general being destroyed. The two titles almost represent what the sounds and themes of WIO bring forth -- destruction of self and the realization that one must fuck life in the gall bladder."
The song 'Mutual Collapse' got an added boost from Grindcore Karaoke honcho Jay Randall, who has released several Winters in Osaka albums in recent months, when he remixed the song using unsettling binaural tones. Randall is another artist whose musical horizons are broad enough to encompass the electrogrind of Agoraphobic Nosebleed and the shock the monkey electronics of Japanese Torture Comedy Hour. Where the two sounds had more overlap in the '90s, Randall said he'd seen the two scenes diverging until the recent boom in bands like Winters in Osaka.
"Until a few years ago the two 'scenes' had become pretty well divorced from one another just about everywhere but California--not as many people coming into noise through hardcore music like there was in the '90s and then Chicago happened: Winters in Osaka, Sea of Shit, Consent and that just set off a bunch cool crossover shit throughout the lake states," he said.
For Jennings, working with Randall was coming full circle to collaborate with a signature music influence.
"Frozen Corpse Stuffed with Dope ruined my life in high school, so it was a total honor to know that Jay Randall was a fan of what we were doing," Jennings said. "It was even more of an honor to have him put up our split with The Communion, and then [Randall] asked to do a remix for us. 'Monuments Collapsing' was sitting around waiting to be released on a split which never happened, so I sent it to Jay to check out and then added it to our personal Bandcamp page. He loved it and asked to do a remix, which I agreed to. Months went by and I forgot about the remix, until he called me one day and told me that he was uploading it and that I needed to be sure to read the instructions on how to listen. His approach with the binaural tones is mind blowing and the track itself shows how versatile and talented Jay is, and hopefully some of his fans who might just know of ANb checked out his older shit with [Japanese Torture Comedy Hour] as well as his current experimental jams."
From their choice of collaborators through the music the core membership is mutually collapsing on to tape, Jennings sees the most recent phase of Winters in Osaka as the strongest yet. Though he'll always serve the as the band's pivot, he said the group has steadily evolved from its earliest days as a tape-manipulating solo project to the point that Winters in Osaka truly feels like a genuine band with every member chipping in noise with a singular purpose in mind.
"WIO will always be me since I founded the project in my bedroom;  however, I look at this current lineup and I don't see how it can be stronger," Jennings said. "The past was reflected on me doing many collaborations and working with many different local and international artists for short periods of time, so I can see how it seemed to be more a collective than a traditional band. However, the lineup has not changed for close to two years now, so for the first time it feels like a real 'band.'"
Posted by Andrew Childers at 7:15 PM

Amazing piece to return on. Really like these guys. Didn't know their were that many people involved, but it makes sense that they were careful with the layering of tracks.

Also, I used to play in 7 person noise group and referred to it as "the wu-tang clan of noise", glad someone else made that joke.