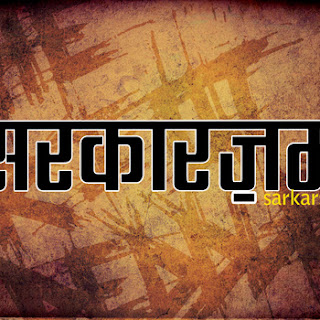 The Riot Peddlers
Sarkasm
Bandcamp
I think it's kind of amusing that India, a country that nonviolently overturned British colonialism, celebrates its Independence Day, Aug. 15, with a 21 gun salute.  The Riot Peddlers decided to stir up the party last Independence Day last year by dropping a six pack of punk ragers.
The snotty, sarcastic punk doesn't wander too far off the trail that NOFX and their more straight-faced  '80s hardcore contemporaries have already blazed (except for the near-hip hop cadence to some vocals that I could do without), so the hook here is the trio is speaking to their unique experiences in India, [wow, I completely misinterpreted like half of these songs; ignore me and see the comment below for more.]
If you've ever heard a punk album at any point in the last 30 years, don't expect to  bowled over by The Riot Peddler's originality. This is strictly by the numbers punk that hits it and quits it in 11 minutes, but it stakes a claim for largely unheard corner of the musical world. And The Riot Peddlers are at their best when they speak from their unique subcontinental perspective. If they'd ditch the punk playbook and bring something new to the table they could probably go far.

[Full disclosure: the band sent me a download.]
Posted by Andrew Childers at 7:10 AM

Ashwin for The Riot Peddlers said...

Hi Anderw,
Thanks for the review. Would like to clarify that Platform No. 3 is about the railway system in India which is used by millions of Indians to travel across cities. We never want to share our "hammered" experiences with the world. On the other hand Sua Rupiya is about consumerism and nothing to do with Pakistan. Sau Rupiya highlights street hawkers who sell products for 100 bucks colloquially called Sau Rupiya. its ironic how are art is interpreted across the globe. Cheers