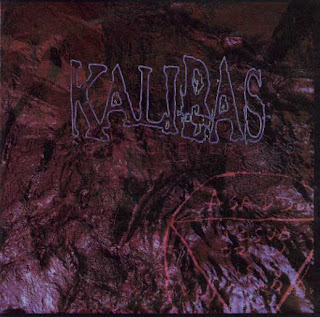 Kalibas
Eyes Forever Red
Howling Bull
2000
One of the themes I tried to develop in Lifetime of Gray Skies is that Anodyne, based on the sheer awesomeness of the bands that were birthed from it, should be regarded as a retroactive supergroup. I think you could slap the same made up monicker on one of Anodyne's contemporaries as well, Kalibas. Grok a lineup that includes Jody Roberts (Kill the Client) and Erik Burke (Lethargy, Nuclear Assault, Sulaco, Brutal Truth) who made the jump to drums. The star power would only get amped up on subsequent albums after they jumped to Willowtip, establishing the lablel's technically proficient death metal aesthetic in the process, and added Aaron Nichols (Defeatist) to the kill crew. How's that for one of the finest bands of musical miscreants you're ever likely to come across?
And Kalibas, for my money, were never tighter or grindier than on their four song debut 7-inch Eyes Forever Red.  With only four songs in the offing, Kalibas nevertheless flashed a wide array of attacks that teased what would be  coming on subsequent albums. They dropped probably my favorite Kalibas song right at the start with "Masticate." It buzzes and swarms, swirling and stinging from every direction at once in unrelenting waves of pointed guitars and strangled screams. The false respite of its stick in the mud middle passage just sets you up for another savage beating. Kalibas just layer on the torture from there with the thistle-shaped pinched harmonics of "Semantic Insanity" and the intergalactic goofballery of "All of Japa's" tech death opening, which serves as Silver Surfer to PSUDOKU's world eating Galactus insanity.
Kalibas were one of those bands loaded for grizzly from the outset and they only upgraded their armory with every subsequent release. A lot of these songs would get another working over on their debut full length Product of Hard Living, but I think I prefer these earlier versions. Nobody ever accused Kalibas of succumbing to the allure of sheeny shiny production, but there's a wonderful low budget grit to this four-pack of songs that introduced a very cool band that flew under too many radars.
Posted by Andrew Childers at 7:50 PM

Don't forget, second guitar on this release was handled by Greg Herman, who later went on to become Psyopus's drummer.

Jody is currently playing guitar in Order of the Dead.

Erik and Pat from this release are playing in Blurring, which also includes Matt Colbert from the 'Enthusiastic corruption of the common good' ep and Scott d'agostino from the final Kalibas release 'Rumors of our demise have been barely exaggerated'.