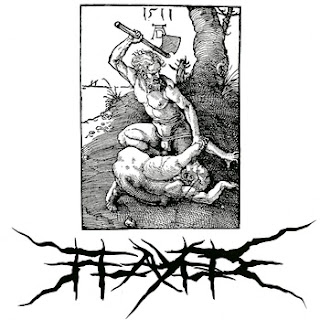 Flayed
Sapiens Sapiens
Bandcamp
Flayed’s guitar has a bumble bee buzz about it the likes of which you probably haven’t heard since Unseen Terror’s apian tone a good three decades ago. It’s a reedy, warbling insistent tone that sacrifices low end glower for an upper register bite. The funny thing is, it all kinda works. Between the buzzing sound, the choice artwork and the name, Flayed has a bit of the old cat o’ nine tails about it The eight songs sound like a faster and more concise version of Fate of Icarus (back when Joe Hovarth of Circle of Dead Children was their mic-man), blurring circular saws of guitar noise, programmed drums and a maniac flinging spittle all over your face.
What Flayed do with that tone is unleash a hiveful of songs that just never stop buzzing about you. Everything about Sapiens Sapiens is tense and angled forward, constantly in motion and never resting for a little more than six sweaty minutes.  “I.IV,” the slowest track of the bunch (keeping in mind that’s a very relative measure) is all pointed skronks like the business end of an angry, chrome-plated ground wasp. Meanwhile, “I.VII” is more uplifting, with a positive, triumphal midsection that recalls Liberteer’s horn parts reinterpreted for guitar.
It’s really interesting to see Flayed take something that could have been passed off as the result of low budget recording and actually bend it into a strength. Whether the buzzing tone was a deliberate choice, I don’t really know (follow up Ape Must Not Eat Ape also flies straight from the hive but it has more traditional guitar heft and depth). What I do know is that it works pretty damn well in context.

[Full disclosure: the band sent me a download.]
Posted by Andrew Childers at 4:44 PM

you know, i love woodcuts, i love Dore, but bands need to stop fucking using what's been used 1,000 times.
like our favorite quote from There Will be Latkas.

did i say Dore? I meant Durer... although I guess Dore applies too.

Like this except for that fucking stupid drum machine.

strife is a false prophet, durer is a superstition!

where are the 36 SBB reviews you're due for?