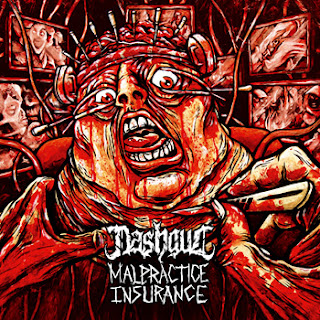 Nashgul/Malpractice Insurance
Split
To Live a Lie
Gore grind has pretty much been denuded of any lingering shock value by 25 years of bands happy to ape Carcass and swipe polysyllabic synonyms for death, decay and destruction from whatever medical dictionary their local library happens to stock. So just when I'm about to write off the whole movement, along comes Los Angeles duo Malpractice Insurance who cleverly twist around that paradigm by playing sly with the language of surgical mistakes, insurance forms and indemnity for doctors  by cranking out five tunes that focus less on the breakdown of the human form (though they have done plenty of that too) and more about the legalities that some from surgical slip ups.
That they pair that lyrical legerdemain with some smoking grind that draws from the same musical well as splitmates Nashgul only makes this 7-inch that much more awesome. In particular, guitarist and vocalist Ivo's delivery is worthy of being singled out for praise; his raspy Jeff Walker screech is wonderfully expressive and shapes the songs' contours where too many grind vocalists are content to play follow the leader and chase the music.
Considered alongside their recent split with P.L.F., Nashgul continue to impress me with their choice selection of musical associates. Meanwhile, the Spaniards' three songs deliver everything you've come to expect: zombified romps through Carcass and Repulsion that revel in gorehound cinema and B-movie action flicks. Faced with the limitation of half a 7-inch, Nashgul make the intriguing choice to go long with their three songs (long in this case being defined as approximately two minutes each). While only three songs feels a bit insubstantial, it's also always good to leave your audience wanting more and I've got to say the awesome chug-a-lug of "Estigma" and the way the middle passage of "Estimociver" nods back to Bolt Thrower's "World Easter" certainly had me digging out my other Nashgul albums. Mission accomplished.

[Full disclosure: Nashgul sent me a download.]
Posted by Andrew Childers at 7:20 PM

still playing catch up with Nashgul... They were a lot of fun live though, and really stand up guys. I dislike goregrind...but this sounds decent.