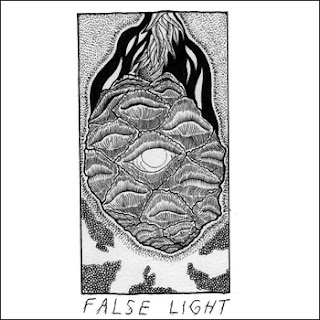 False Light
False Light
Dead Chemists
False Light seethes with the fetid humidity of basement shows and stifling rehearsal space angst, roiling up a savage ruckus that's noisy and close enough to raise welts.
False Light sound nothing like Priapus (and they are from the other Carolina), but there's a definite kinship. They have that same sui generis sound, that same sense of focus and composure as they rip through grind and wallow in soggy bog sludge, often the space of the same 90 seconds. Every second of this six song EP is coherent and purposeful enough that I'm willing to forgive them for ending on a slow song. It all just sounds so considered and thoroughly crafted that closing with a six minute detour through the gutters of misery is just as essential as the 78 second blitzkrieg of "Rotting Teeth," which lights the EP's fuse.
This South Carolina quartet has an impressive command of dynamics and musical tension both within and between songs. Opener "Rotting Teeth" gives way with a pit-winding breakdown that stomps straight into the foot race of "Almighty Thief." And False Light litter their EP will small, brilliantly conceived moments and transitions like that which make their effort an invigorating, engaging listening experience whether it's the strangling guitar noise of "Lung" or the way the whole affair ends with the sound of cables being yanked out of guitar jacks. And that's all before I get to the rabble rousing vocals which exhort everyone to start storming the ramparts of ignorance and misery.
This is the Diogenes of grind, turning a klieg light on every human failing and foible, burning away the foul until only honesty remains.

this stuff's my jam, happy you agree.

I dig False Light too. Waiting patiently to hear more from them.