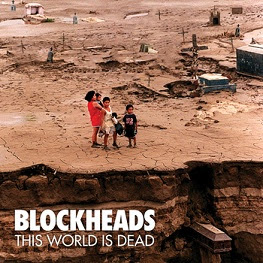 Blockheads
The World is Dead
Relapse
Calling Blockheads an old school grindcore band doesn't do them justice. Ye olde timey one room schoolhouse full of repurposed punk riffs and unrelenting blastbeats is the only matriculation these French lifers have ever known. Though The World is Dead is only their fourth album, the band formed before Barney Greenway got his shot at Napalm Death's mic but without racking up the same name recognition and cache. Relapse's might and wallet might be able to power them to a late career surge by broadening their footprint.
With all their accumulated years of experience, Blockheads make the most of The World is Dead. True to their vintage, they turn in 40 minutes of early-style grind that slots comfortably between Extreme Noise Terror and the earliest Phobia material. It’s not flashy or revolutionary, but Blockheads bring craftsmanship and temperament born of time and patience to the plate. The result is rip snorting ride through 25 songs of unrepentant agitprop boiled down to shoutable 90 second slogans (“Be a Thorn to Power,” “Follow the Bombs”) that, sadly, would be relevant to any political era in grindcore’s three decade lifespan.  Anyone who enjoyed Blockheads’ split with Mumakil (actually the second pairing for those two bands in the space of three years) knows there’s more than a little bit of overlap in their sound. Blockheads may have a touch more of Rotten Sound’s gear shifting clank about them, but The World is Dead comes off as a more focused and intense take of Mumakil’s Behold the Failure (Mumakil’s vocalist Thomas guests on the record as well).
The World is Dead is a little on the long side and the plodding seven minutes of “Trail of the Dead” could have been shoved down the memory hole without too many tears shed. But when you go the better part of a decade between albums, you have to wring every second out of records when you get the chance.
Posted by Andrew Childers at 6:38 PM

album art for this really excited me, but the music's too over produced to be this generic.

a good thing that you reviewed this album, I think Blockheads deserves more recognition. I also hope their Relapse deal will change that..

for the french readers, here's an interview I did with them about This world id dead and more (interview in french but the review is in english):
http://theblastingdays.blogspot.fr/2013/01/blockheads-this-world-is-dead-2013-i.html