Blast(beat) From the Past: Torture Incident

Hearing Agathocles bassist Tony killed himself and picking up the band’s split with Torture Incident only to find that band has called it quits has made me a tad nostalgic. So I thought periodically I’d pull out a few older albums that I think deserve more attention than they have received. None of them will be groundbreaking (for that see the list top right), granted, but they’ll all be discs I’ve enjoyed that maybe haven’t gotten the right recognition. Also, I might be able to reign in what I spend on new albums before my newly wedded wife realizes just how expensive this hobby is and de-nuts me in my sleep one night. 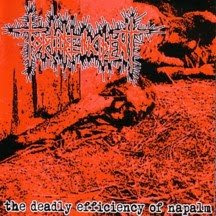 Torture Incident
The Deadly Efficiency of Napalm
Dark Coliseum Records
2001
Christopher HItchens (when he’s sober) can be one of the most erudite of political commentators, turning an elegant phrase with a Ben Johnson flair and excoriating his enemies with a savage glee. The Brit-naturalized-as-an-American can also be one of the single most frustratingly right wing ideologues in matters of the Middle East. His bloviating in favor of our current Iraqi catastrophuck is maddening, so it was a flash of refreshing intellectual honesty a few months ago, after years of standing up for Bush’s Constitutional over-reaching, particularly on torture, when Hitch strapped himself to a waterboard and spluttered through a session, himself. And guess, what? Turns out it’s torture.
But the guy could have spared both logic and several hundred “enemy combatant” detainees the torture and slapped on the sole solo album from Malaysia’s finest grind export, Torture Incident, seven years ago. Fast forward to track 15, “America’s Hyprocracy on Human Right” [sic], which opens to the sampled sounds of some poor bastard being drowned.
Torture Incident makes no bones about their influences on The Deadly Efficiency of Napalm from the almost namecheck in the album title, Napalm Death-style logo though the From Enslavement to Obliteration style grind contained therein.
Though it’s billed as a full length, Torture Incident gnaw through 19 tracks in about the same time it will take you to watch a Metalocalypse episode, commercials included. The songs themselves rip by in whirlwinds, like tornadoes thrashing around jagged pieces of tetanus-laden metal shards, carried by gusts of sub-Scum production and a fuck all attitude.
Despite forming in 1995, Torture Incident, like their short as fuck songs, just never seemed long for this world. In their wake, they leave a handful of splits, most notably with Agathocles and Embalming Theatre, and The Deadly Efficiency of Napalm, a stinging microgrind guerilla shout out from South East Asia that adapts what Birmingham birthed, aiming it at a corrupt political establishment in a corner of the world where economic, religious and political autonomy are genuinely in jeopardy.
Posted by Andrew Childers at 1:19 PM

Labels: blastbeat from the past, dark coliseum, southeast asia, the deadly efficiency of napalm, torture incident

I heard their split with Damage Digital, Demisor, and Extreme Decay just recently. Can't say I don't like it. :D

That Christopher Hitchens article was amazing. Thanks for turning me on to that.