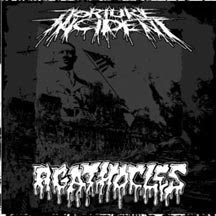 Agathocles/Torture Incident
Split
Blastworks Records
A-ha! So this is where the empty Folgers can Lars Ulrich abused in lieu of a snare drum on St. Anger ended up. What sounds like absolute shit on an album that sucked millions of dollars out of the national GDP is perfectly at home anchoring the wonderfully awful production values of this grind twosome’s split.
I decide to snag this album, released way back in January, after learning Agathocles bass player Tony killed himself only to be further depressed to learn the underrated Torture Incident has likely called it a day as well (their MySpace page lists them as R.I.P. and they didn’t respond to my messages looking to confirm that). So there’s a real pall hanging over this meeting of Belgium’s leading blast squad and Malaysia’s fiercest grind dissidents that has nothing to do with the music contained herein.
If you love Agathocles, here’s more of the same. The Belgians have been banging out a delightful racket of straight ahead, crusty as fuck grind for the better part of a quarter century and band fixture Jan Frederickx is not about to tinker with his blue ribbon recipe. Drums blast, guitars scrape incoherently through the demo-quality mix and the modern world’s ills get a stern talking to, Cookie Monster style.
Aside from the slightly better production values (and slight being a relative measure, here), you’d be forgiven if you failed to catch the transition from Agathocles’ 14 lead off tunes to Torture Incident’s closing 12 tracks, which were actually recorded in 2006.
Sounding like Agathocles, Assuck, Anal Cunt and a whole slew of other prime grind bands that don’t start with the letter A, Dick Cheney’s house musicians unleash more of the ripping old school blast beat barrage that characterized their too brief existence, railing against the political and religious oppression of Malaysia, where Islamic rule is the law of the land.
While the songs’ production sounds a tad bit worse than their mini-album The Deadly Efficiency of Napalm, the songwriting and performance are just as tight, hitting and running in under 90 seconds and never overstaying its welcome.
It’s grind at its basic with no surprises lurking, but if you thought Phobia went off the rails with Cruel’s cleaner production, if you have a lo-fi jones that must be fed or if you just want to memorialize a band and a bass player that stayed true to grindcore’s original promise and premise through two decades of upheaval and stylistic changes, then Agathocles and Torture Incident will not disappoint.
Posted by Andrew Childers at 9:06 AM