G&P Review: Ghostlimb (Getting Way Too Literary With My Reviews Week Part 1) 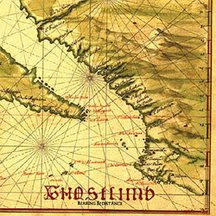 Ghostlimb
Bearing and Distance
Level Plane
On a cross country road trip with a His Hero is Gone soundtrack, California trio Ghostlimb pen a travelogue of angst and understanding through the vacant, stripmalled 21st Century.
The exquisite artwork, a fold out map of California as an island breaking away from America, could easily have graced the cover of Thomas Pynchon’s Vineland, a tome that wrestles with the cultural upheaval that has characterized (some would say lampooned) that state since the 1960s.
Combining Nashville’s finest export’s penchant for tense moods and gloomy melodicism, Ghostlimb tears through 15 tracks of anxious hardcore in just a hair under 19 minutes on their second EP. With that unpretentious palette, Ghostlimb diagnose and treat the modern malaise with minute bursts of furious hardcore sutured together with fleeting, frantic melody. “Seven” unleashes squalling guitar leads while “Document” and “Ruins” reinvigorate the melodies of the underrated I-Spy (I’m getting a strong “Just Between Friends” vibe).
Produced by Graf Orlock’s Jason Schmidt, every searing note and desperate drum beat leaps out of the speakers as soon as laser touches plastic.
Where most hardcore bands’ lyric sheets are afterthoughts only rarely if ever consulted, Bearing and Distance is a well-written and genuinely thoughtful meditation on despair and hope in the face of cultural ennui without wallowing in Poetry 101 fromage and worn out cliché. The unsettling relationship with your own culture (“The Ocean Floor”), acknowledging the debt to artists who have gone before while appropriating their tropes to create something new (“Copywritten”), and the hourly battle against complacency (“Bridge Above the Water”). They may be fairly typical topics for frustrated punks, but Ghostlimb inject new, desperate blood into the discussion, approaching them with a passion and insight sorely lacking in most metal and hardcore.
I am not doing this album justice, I know. Simply put, Bearing and Distance’s cartography of modern America is a must hear and easily one of the best records I’ve found in 2008.
Posted by Andrew Childers at 7:21 PM

I haven't heard this LP yet, only the EP (2007?). Although I can't help getting bored relatively quickly by pretty much any melodic hardcore(/(neo)crust) band, I do enjoy Ghostlimb quite a bit. Great band!