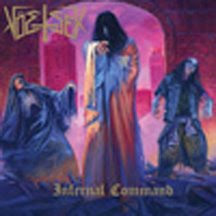 Voetsek
Infernal Command
Selfmadegod
Vampire zombie thrasher punks art and power fucking violence cover of “Strange Fruit?” Oh hell yeah.
This co-ed kill squad’s second full length (after a host of splits and EPs) slots nicely next to Crom and Battletorn as a reinvigorated crossover band that takes ridiculous music seriously. Hell, buy it for the song titles alone. “W.W.L.D. (What Would Lemmy Do?),” “Blueprint for the Perfect Circle Pit,” “Self Righteous Fuckdom” and “Plagued by the Winds of Conformity” – I dare you not to grin.
More than penning a good line, frontwoman Ami Lawless and her four accessories before the fact breathlessly rip through 17 songs of DRI meets early Metallica at a Capitalist Casualties basement show despite her acquired taste vocals. She tends to remind me of my toddler nephew at his nap time whiniest.
And just in case you needed one more reminder of how much San Francisco’s richest blow since they sobered up and spent time getting in touch with their feelings, album standout “Bully With a Badge” snaps along like “Whiplash” before giving away to an Arabesque bit of Mastodon twin guitar goodness. Even “Five Years in Iraq” lampoons “Master of Puppets” with a slow mo vocal fade out. Unfortunately, when Lawless gets all political, such as the aforementioned “Iraq,” the album gets dragged into the mire of tired cliché that saps the whole outing.
Musically, Voetsek (which is Afrikaans for “get lost” btw) just kill it. Guitarists Ben Reduction and the awesomely monickered Jef Leppard snake between each other’s riffs and runs over Athena Dread’s foot-on-the-monitor bass gallops and Scotty Karate’s (another fucking awesome name) propulsive drumming. But, sweet Thor, those vocals -- that way lies madness.
There are a lot of new jacks out there aping the thrash greats of the ’80s but Voetsek are like the Encino Man of thrash (minus the gratuitous Pauly Shore but just as intentionally retarded), only now getting thawed out after a 20 year deep freeze, cinching up their bullet belts and taking thrash and fastcore to the sweaty, crowded basement where they belong.
Posted by Andrew Childers at 10:14 AM