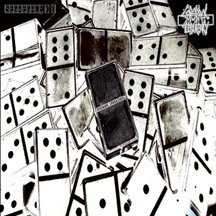 Cerebral Turbulency
Segregace K Nule
Khaaranus
If the tumbling dominoes on the cover don’t properly evoke a sense of finality, Cerebral Turbulency slapped a tombstone on the inside artwork of what will be their final album to help get the point across.
After six albums and a decade and a half, these hip Czech mates (for all you hockey and chess fans) have imploded amid their trademark mass of blorps, bloops, bleeps and other electronic detritus. For years they have effortlessly navigated the kind of eclectic electronic digressions that sound so forced and fake in Antigama, which makes it all that much more of a fucking shame they’re calling it a career.
Though that trademark open-mindedness is still C.T.’s M.O., the band has streamlined its assault a tad, going out with a grin and a grind. While prior disc, Crash Test, sounded like industrial Norwegian misanthropes Red Harvest gone grind, Segregace largely lays aside their martial, industrial overtones for a far more *gasp* fun vibe. Daring to crack a smile amid the sea of oh-so-serious metalheads in their blackest of black shirts may be Cerebral Turbulency’s finest trick to date.
“!Dobry? Den!” charges out of the gate sounding like Dino minus a few mandatory distemper shots while “Love Zonk” sizzles and skitters like a pat of butter on a hot griddle.
While a lot of bands, I’m thinking Agoraphobic Nosebleed particularly, have successfully used electronic flourishes as window dressing over a foundation of traditional grind, few have so successfully incorporated stuttering samples and fried FX boxes into the fundamentals of their songwriting quite as insouciantly as these Czechs, and we’re all the poorer for their loss.
Posted by Andrew Childers at 9:18 PM