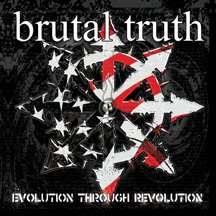 Brutal Truth
Evolution Through Revolution
Relapse
Say you wanna revolution? Well grizzly guerillas (gorillas?) Brutal Truth load up a 20 round clip of metal jacketed grind with a hollow point of journey to the center of your mind experimentalism with fourth full length Evolution Through Revolution.
A funny thing happened on the way to the Brutal Truth victory lap reunion, however. In the dozen years between their untimely kiss off and the recent Lazarus routine, every band that ever mistakenly purchased a Coltrane album has been swinging from the New Yorkers’ collective dick, aping the angular kitchen sink and all attack that was so distinctive and anachronistic a dozen years ago.
But if they have even the slightest inkling their signature sound was raped in a Bowery back alley since last they set needle to wax it doesn’t show as the band nods to its trailblazing path (the angular noise and horns of “Semi-Automatic Carnation” harkens back to the ominous cover of “It’s After the End of the World” while the microburst grind of “Branded” is a direct nod to Extreme Condition’s Guiness record holding “Collateral Damage”) while proving they can still kick their imitators in the nuts with impunity.
With better-than-Billy Anderson production and sleeker, hungrier songwriting, Erik Burke’s calliope-core guitar skronk, honed during his Lethargy tenure, is the perfect counterpoint to drummer Rich Hoak’s increasingly abstract and conceptual take on grind with Total Fucking Destruction (“Get a Therapist … Spare the World” bears Hoak’s distinctive cynical stamp). From the The predatory lope of “On the Hunt” to Danny Lilker’s ominous thunderhead bass rumble dominates “Attack Dog” and while Kevin Sharp’s distinctive roar has more of a raspy edge, he saws his way through the musical fray as he declaims against everything that went wrong with the world since last he checked in. Musically and thematically, you easily could have slotted “Global Good Guy” on the last Kill the Client record.
As a rule, dead bands should stay dead, but I’m more than willing to issue a one day pass for these drug crazed grind freaks because this animal kingdom’s sound just keeps evolving and revolving.
Posted by Andrew Childers at 7:31 PM