G&P review: Victims (How Swede it is Again, Part 7) 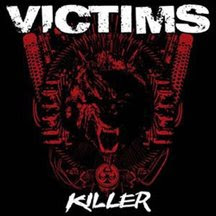 Victims
Killer
Deathwish
The slavering V8 wolf’s head on the cover pretty much tells you everything you need to know about Victims’ latest slab of crusty as fuck d-beat punk.
Though it’s been available on wax for about a year, American hardcore staple Deathwish dragged Killer into the digital era. And seriously, what the fuck took so long? Seriously.
Guitarist Jon Lindqvist (who works days in Sayyadina) performs battlefield surgery on his guitar, and bassist Johan Erksson’s bestial roar has never, EVER sounded so pissed. Built on Andy Henriksson’s (also of Sayyadina) steamhammer drum assault, Victims scorch 16 tracks of elite Scand-beat crust that traffics in exceptional songwriting.
The aptly named Killer hits with the subtlety of a rush hour semi pileup. “We’re Fucked” (take away message, the world sucks and we’re fucked) is about as nuanced as you’re gonna get from Lindqvist et al. (In case that innuendo slipped past you unnoticed, follow up “Destroy and Rebuild’s” gang chant chorus “The world is fucked up” may hammer that point home.)
The transition from the gang chorused goodness of “Try?” to the spiked belt melodies and Discharge worship of “Killing” is a natural wonder that should be preserved in amber and unearthed for study and made the subject of dissertations by a more enlightened era that doesn’t equate buying a Green Day shirt from your mall’s Hot Topic with the true essence of punk.
Posted by Andrew Childers at 7:22 PM

This review just makes me even more excited about seeing Victims...and Sayyadina at MDF! Good stuff.

This band brings it! Saw them way back in Lawrence, KS, in a BBQ restaurant of all places. Played with skitsytem and black market fetus. nothing like doing a circle pit while the kitchen crew looks on...