G&P review: Wolfbrigade (How Swede it is Again, Part 6) 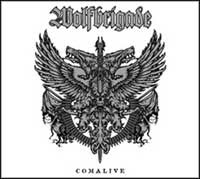 Wolfbrigade
Comalive
Deranged
I’m not fickle, but every so often even I get burned out on Swedish punk. But right at the nadir of my doldrums invariably I latch on to an album that reignites my love of crusty d-beat punk played with Scandinavian purpose and passion and it’s like losing my punk cherry all over again. Last year it was Disfear’s Live the Storm I contemplated permanently gluing into my CD player. I may have to sand off the Krazy glue because it looks like 2009 will belong to Wolfbrigade’s Comalive.
Wolfbrigade (ne Wolfpack) turn in an album that’s like snorting a line of adrenaline and fucking a naked electric socket. That’s not to say there’s thing one new about Comalive. From the clichéd air raid siren opening to the bass throbbing crust, everything about the album is comfortably familiar like that worn in pair of combat boots. Scandi-punk’s own inertia is overcome by the band’s collective force of will and they harness a lifetime of hardcore ethics and energy (seriously, some of these guys have roots in the legendary Anti Cimex) to pull their musical Lazarus routine.
“High Tech Degradation” ticks off a familiar litany of how humanity is destroying itself. Musically, “Barren Dreams” churns with stuttered thrash picking and “In Adrenaline” rips through a dervish solo scratched over an insistent punk drive.
Disfear ruled my punk listening in 2009 and unless American hardcore steps up in a major way in the next 8 months, it looks like that title will remain with the Swedes.
Posted by Andrew Childers at 6:25 PM