Blast(beat) from the Past: Rune 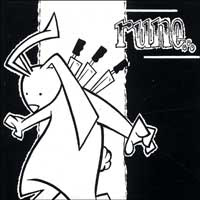 Rune
Rune
Crucial Blast
2000
Fluffy bunnies who scrunch their noses and deliver sugar-larded eggs each Easter may not seem like the most terrifying member of the rodent family, but try telling that to my brother the Christmas my parents decided to give him the film version of Watership Down under the mistaken impression the story of throat-ripping rabbits at war was a tale suitable for a toddler. While that’s certainly the high water mark for lepus atrocities, Rune came close with the backstabbed bunny art on the cover of their 2000 self titled EP (also known as Call of Hearts in some quarters).
Before the Neurosis meets Morbid Angel at Wrestlemania cage match that was the staggering The End of Nothing or the industrial skree of the Kalibas split on Relapse, the Ohioan Neanderthals beat out 12 minutes primitive caveman death/grind.
Over three songs Rune delivered gutter scraping vocals and street sweeper riffing with none of the finesse or carefully arranged texture of their later efforts. Opener “Call of Hearts,” which accounts for half the EP’s run time, brought all the nuance of a ball peen hammer murder in a holocaust of slamming drums and scooped out guitar tones.
Vocalist Austin Lucas’ performance is damn near inaudible without some quality headphones amid the band’s cacophony though he claws his way atop “Four Seasons Landmark,” howling like a transplanted John Tardy while bassist David Mann thwacks strings as thick as power lines to get the kind of brown note rumble Sunn O))) has chased for a decade.
The greener pastures and deeper pockets of Relapse and Willowtip would beckon, but Rune’s debut EP is an interesting trip back down the evolutionary ladder of a band that would singlemindedly set off into metal’s wilderness, leaving a trail of rabbit corpses in its wake.
Posted by Andrew Childers at 7:46 PM

I demand a review of 'Odd Senses' by Psyopus.

brought all the nuance of a ball peen hammer murder in a holocaust of slamming drums and scooped out guitar tones.

That's one of the best things I've ever read. Ever.

sorry, man, psyopus has never done anything for me. probbaly won't be wasting my time on that one.