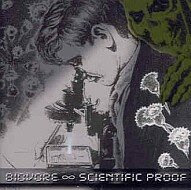 Biovore
Scientific Proof
Battlezone
2002
Anyone who has bounced around the DMV metal circuit the last decade is guaranteed to have run into Sean Beasley at least once. Long before he got his (relatively) cushy day job thumping bass for Dying Fetus, anyone who haunted the late, great Phantasmagoria or more recently Jaxx most likely ran into Beasley holding down the low end for the epically minded Garden of Shadows, usually sharing the stage with the likes of Opeth if they were lucky or past their expiration date Amorphis and Moonspell if they weren’t.
Jumping even further in the WABAC machine, Beasley could be found toiling in relative obscurity for Sadistic Torment (with a young Sparky Voyles of Misery Index/Dying Fetus fame) and the Voivod-humping Biovore.
Scientific Proof, released on reigning scenester/Deceased magnate King Fowley’s Battlezone label, purports to tell a Dimension Hatross-style tale of scientists who seek to popularize their research into the deepest mysteries of existence only to see their work suppressed by shadowy agents of the government. Eluding their captors, the scientists eschew the peer-reviewed journal route and disseminate their findings in the form of 50 minutes (complete with about 15 minutes of pointless noise at the end) of Amebix crust punk pessimism and Voivodian astral projections.
Guitarist Shane Fuegel had a keen ear for songwriting with the endlessly spiraling power drill of “Assembly Line,” the slashing wind shear of “Digital” or the Iron Maiden-light riffing of “Atom Bomb,” which were only heightened by the overly trebly production. Frontman Vinnie Matthews (also ex-Sadistic Torment) had a Chloraspetic scrape rasp and drummer Eric Mayes (later to take Fowley’s seat during Deceased shows) had enough sense to keep it simple and provide Fuegel the space he needed to operate.
Given time and a better budget, Biovore might have had a wider audience, but as it is Scientific Proof will remain a time capsule documenting an obscure turning point in Maryland metal.
Posted by Andrew Childers at 10:05 AM

Hmm, why haven't I checked this out? Good review, thanks!