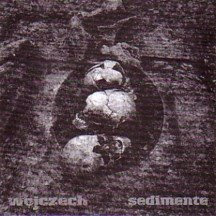 Wojczech
Sedimente
Selfmadegod
2005
Ferocious German foursome Wojczech were the first to lay title to the grindcore Sudetenland currently prowled by like-minded Poles Exit Wounds, staking their panzer-backed claim on sole long player, 2005’s Sedimente. The Germans’ grindcore arsenal was stocked with steampunk instruments of death that may not strike as precisely as today’s laser-guided munitions but are awesome for their curious design and sheer menacing bulk. Building on a foundation of From Enslavement to Obliteration, Wojczech only came with one setting: deadify.
“Superparadigma’s” early album appearance is a manifesto of drooling pitbull intensity and cage fight dynamics transcribed in about 2:20. Recognizing a national treasure, the Germans should immortalize drummer Heinz’s (who is also responsible for the Sedimente’s striking monotone gray artwork) face on the Brandenburg Gate for the atavistic savagery he incarnates on “Wachkoma.”
Wojczech’s lightning war approach to grindcore all but guarantees Sedimente would be a slim album (a pair of seconds short of the 24 minute mark) but the band bleeds out every drop in their veins and retch up every ounce of bile before that last second clicks closed, especially on two part closer “Redeschleife/Reste der Vergangenheit Letzter Ausgang Opferrolle,” a Teutonic mouthful that leapfrogs warp drive straight into to ludicrous speed.
Sedimente is tribute to the German national spirit, an unpretentious but remarkably efficient import of carefully engineered grind that puts many of our domestic models to shame.
Posted by Andrew Childers at 6:17 PM

Germany seems to be coming out with some great bands lately.
Agreed?

they have indeed. and i just stumbled across another gem from 2008 that missed and will be posting shortly.