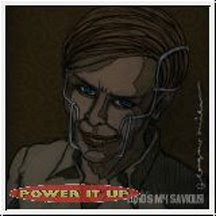 Who’s My Saviour
Glasgow Smile
Power It Up
2007
Drugged out deadbeats who spend more time scouring overpriced vintage clothing stores for bell bottoms from their parents’ distant past than practicing their fucking songs can suck it because a trio of German grinders were responsible for the best journeys to the center of my mind way back in 2007.
Grab a copy of Glasgow Smile, Who’s My Saviour’s debut album, and immediately fast forward to close out track “Save Your Breath,” a sweat-dripping-off-your-nose-tip claustrophobic pocket of wavering sound that mixes churning stomach acid guitar work with blastbeat drumming and eerie dialog samples lifted from Stanley Kubrick freakout 2001. Three minutes later, shovel your mandible off the oily pavement and give the whole disc a spin.
Who’s My Saviour just might be the greatest grind band you’ve never heard of. Seriously. This young band brashly renovates the house that Napalm Death and Brutal Truth built, adding new wings and modern fixtures without sacrificing the original structure all with a dexterity and poise that is staggering. Damn near every song finds the band foraging through grind’s frontiers to import new musical elements.
Like the roiling anthill of a riff that sounds like a colony on the warpath guitarist Stephan conjures on “Countdown.” Or the way “When Magic Turns into Black Plague” reinterprets titanic, tidal Mastodon movements through Terrorizer acceleration. Even the Pelican chord sheen of “Shizo” surfs a wave of blastbeats Kill the Client would proudly claim.
We all know that friend who’s into metal but bitches that grindcore is incomprehensible noise lacking structure or novelty. Who’s My Saviour’s expansive palate and bold musical vision could be the gateway drug that starts a lifelong blastbeat addiction. Slip him or her a copy of Who’s My Saviour and put a Glasgow Smile on his or her face. Even if you already love grind as much as I do, you owe it to yourself to check this out. This damn well should be the sound of the future.
Posted by Andrew Childers at 6:58 PM

Labels: blastbeat from the past, glasgow smile, grindcore, power it up, sprechen sie deutsch, who's my saviour

Noted. I'll have to check this out.

I can't remember how I found this blog, or how I ended up reading this review.

However, I now own that album, and it is pretty fucking rad. There are a few problems, mostly with production (the snare drum occasionally become EVERYTHING), but this is strange and good.