In a last ditch bid to prove I’m not just a shameless Swedish slut (because oh I have more Scandi-goodness lurking the in the wings), I set my sites a few hundred clicks to the south and dug through my closet o’grind to exhume a quartet of killer German grinders not named Cyness or Yacopsae who manage to pay homage to the ghost of grindcore past while simultaneously tracing a cartography of the sound’s frontiers, potently reminding how much terra incognita remains to be explored in the style’s humble universe. 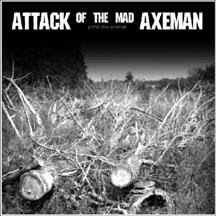 Attack of the Mad Axeman
Grind the Enimal
Flowerviolence
2007
Does the mere thought of The Locust in their sublimely absurd plastic bug suits send you screaming to your nearest Lambgoat thread to cast imprecations the band’s way employing various novel uses of the adjective gay? If so, look away now. Not that these German blastbeat bunny huggers sound like the dreaded Californians, but they have been known to take the stage dressed like turtles, snails and other rejects from Disney’s roster of anthropomorphized animals.
Sartorial excesses aside, Attack of the Mad Axeman actually sound like a meatier Cyness ripping through the Earache back catalogue, clearcutting a forest of trad grind on short debut album Grind the Enimal.
Channeling the sounds of the animal kingdom through 18 minutes of no frills grind, Attack of the Mad Axeman give voice the plight of the creatures we manipulate for food, labor and love (read the band’s thank you/fuck you lists, several hundred word homages to bands with animal-themed names). Making that connection explicit, the band transition from a screeching simian cry and piercing guitar tones on “Survival of the Fruhest,” a late album standout.
It’s a team effort with Attack of the Mad Axeman with drummer Helix Pomatia (a kind of snail, btw) delivering a double kick clinic on “Animal Dictionary #1 while guitarist Procyon Lotor (the fancy Latin nomenclature for beloved nocturnal bandit the raccoon) turns in a tortoise shell pattered riff on “When Turtles Kiss.”
But if you want to skip all that because these Deutsch do-gooders add a little drama and flair to their stage presence, that’s your choice. 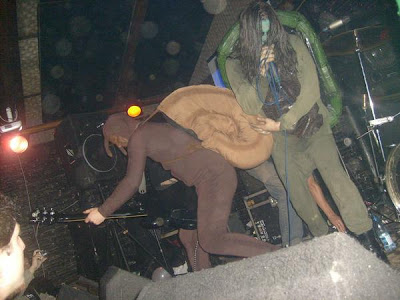 You were warned.
Posted by Andrew Childers at 6:39 PM

Labels: attack of the mad axeman, blastbeat from the past, flowerviolence, grind the enimal, grindcore, sprechen sie deutsch