Every band that’s ever blasted a beat owes a royalty check to Napalm Death, and though they only recorded one true grind album, much has been made of all the Carcass clones swinging from that band’s dick. But pinpointing the influence of Terrorizer – the third head of Earache’s early grindcore Cerberus – is a little more subtle. It’s that peculiar admixture of punk exuberance and metallic precision that separates California’s finest from the hopped up hardcore and slaughterhouse floor scrapings of their transatlantic cousins. But the funny thing is just about every country seems to boast its own Terrorizer clone, so periodically I’ll pull one out of my magical closet o’grind to spotlight the myriad ways World Downfall continues to hold sway. 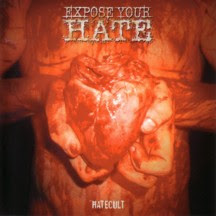 Expose Your Hate
Hatecult
Black Hole Productions
2005
Expose Your Hate never want to leave you asking, What was that band’s name again? Just in case you have a short attention span they shout their moniker repeatedly throughout the first song, helpfully titled “Expose Your Hate.” That’s just good marketing.
Repping Brazil in the Terrorizer analog sweepstakes, Exposure Your Hate capture the same blend of metal heft and precision and punk as fuck attitude that made World Downfall such an instant classic. Sure the cast of villains seems not to have changed in the past 20 years with the usual suspects such as religion (“Bible Bullshit”), the nightly news (“The Media Virus”) and war (“Faces of War”) getting one more verbal flaying.
Hatecult’s music is just as delightful an atavistic mix of knuckle-dragging Terrorizer worship with gargle/screech Carcass vocal handoffs. Grammatically confounding album standout “Despise for Animal Life” tattoos your long term memory with a pinch harmonic stylus while “Appreciate the Dying Planet” is a bass-led, sunbaked blister of arid grind and sirocco-swept doom trudge death that boasts better double bass than a pre-Morbid Angel Pete Sandoval could muster. To mix up the tempos, closer “Inherent Human Cruelty” lashes charnel vocals to grave moss pacing. Led by a Full Metal Jacket sample, “Lies” pierces your skull with the efficiency of a 5.56 mm round.
There’s a whole lot of hate going on during Exposure Your Hate’s Hatecult. Won’t you join the cult?
Posted by Andrew Childers at 10:53 PM